KPA Board gets ‘behind the scene’ tour of Kentucky Historical Society; handles original Kentucky Constitution 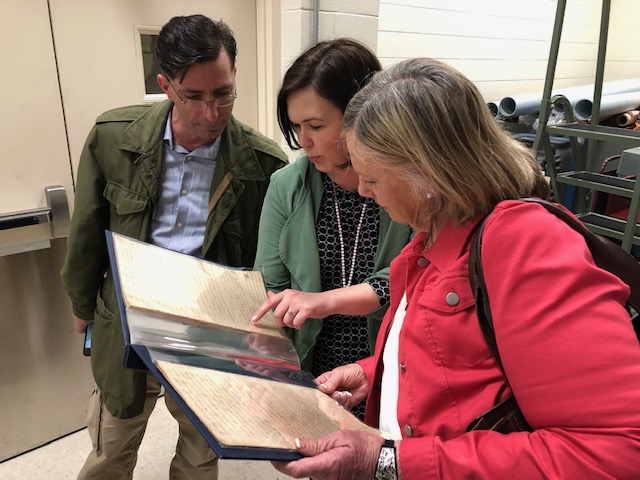 The Kentucky Press Association Board of Directors held its Spring meeting April 18 at the Kentucky Historical Society in downtown Frankfort. The history center is located just two blocks from where KPA began on January 13, 1869.

Before the meeting, Board members were treated to a “Behind the Scenes Tour” of areas of the center not currently available for public tours. The “behind the scenes” tour the Board received from KHS’ Director of Research Experience Louise Jones is unique but in May the tour will be available to the public for $25.

The original Constitution inspection came with another interesting artifact. The notes made during a series of meetings that led up to the writing of the Constitution were inspected by Board members as well. Of course, there was a “convention” prior to adopting the Constitution. Pages and pages of notes and comments about what took place in each meeting shows how the Constitution itself came about.

The meeting was held just two blocks from the Sower Building on St. Clair Street. That was the office of the Frankfort Yeoman in January 1869 when a group of publishers from around the state gathered to discuss forming a society to benefit all Kentucky newspapers. That was the foundation for the Kentucky Press Association, celebrating its 150th anniversary this year.