KPA signs on to ‘Journalism Competition and Preservation Act’ support 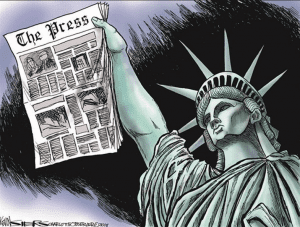 Creating an even playing field for the Free and Diverse Press

The Journalism Competition and Preservation Act creates a temporary safe harbor for news publishers to band together to negotiate with online platforms to protect Americans’ access to trustworthy sources of news online. The Journalism Competition and Preservation Act was introduced by Representatives David N. Cicilline, the Ranking Member of the House Judiciary Antitrust Subcommittee, on March 7, 2018.

The free and diverse press—particularly local press—is the backbone of a healthy and vibrant democracy. More than a quarter of Americans visited “fake news” sites in 2016, but the problem is far bigger than that. The control of access to trustworthy news online has become centralized by just two platforms. Last year, the Pew Research Center reported that the majority of Americans access news through only two platforms—Facebook and Google—noting that “Facebook outstrips all other social media sites as a source of news.” Recent market reports also indicate that these same companies control the vast majority of all digital advertising revenue, growth, and traffic referral for news online. As a result, revenue for news publishers has plummeted by $31 billion since 2006.

The Journalism Competition and Preservation Act establishes a 48- month safe harbor for the free press to band together to negotiate with online platforms to improve the access and quality of news online. Importantly, the safe harbor is narrowly tailored to ensure that coordination by news publishers is only in the interest in promoting trust and quality journalism. The Journalism Competition and Preservation Act only allows coordination by news publishers if it

(1) directly relates to the quality, accuracy, attribution or branding, and interoperability of news;

(2) benefits the entire industry, rather than just a few publishers, and are non-discriminatory to other news publishers; and,

(3) is directly related to and reasonably necessary for these negotiations, instead of being used for ulterior purposes.

Protects the Free Market, Jobs, and the Marketplace of Ideas.

Free markets depend on an even playing field. But in the absence of a truly competitive landscape, innovation suffers, businesses fail, workers are laid off, and consumers are harmed through less choice and worse service. Sally Hubbard, a former antitrust enforcer, wrote recently that the online platforms “compete against legitimate news publishers for user attention, data and advertising dollars,” but instead of competing on equal ground, the platforms “pull levers that harm publishers’ business models and advantage their own.” The majority of Americans are “more concerned” that not enough is being done to address the “relentless spread of fake news on their platforms,” representing “a seismic shift in the public’s perception” in a short time on the issue, according to a recent Axios-SurveyMonkey poll. According to the Edelman Trust Barometer, 63% of people say they can’t tell the difference between good journalism and falsehood online. And at a recent conference at MIT, former President Barack Obama reportedly referred to the online platforms as a duopoly, stating that “[w]e have to have a conversation about their business model that recognizes they are a public good as well as a commercial enterprise. They’re not just an invisible platform, they’re shaping our culture in powerful ways.”

A list of supporting organizations can be found on page 3 of the Fact Sheet.