From the Toronto Globe and Mail

For the last few Inaugurations, KPA has provided full-day coverage of the parade, the swearing in and the Governor’s Ball. It’s become a pretty popular service since our newspapers can’t get to Frankfort to get pictures of their local band or dignitaries.

Wednesday afternoon, I got a call from Tim McKenna with the Toronto Globe and Mail. The Globe and Mail had announced about a week ago that Kelly Knight would be named U.S. Ambassador to Canada by President Trump.

They had searched high and low for a picture of Kelly Knight but the only one they could find was credited to the Kentucky Press Association. I don’t know Kelly Knight but when Tim mentioned Joe Craft things started coming together. And then the next thing he said made me think, “It’s got to be from the Inauguration.”

Tim said it looked like it was taken at some place all fixed up for Christmas. “And there are marble steps.”

Bingo! It was Governor Bevin’s Inaugural Ball and Teresa Revlett was taking photos of the parade, the swearing in and the Governor’s Ball. Now she’s gotten international exposure with one of the photos she took.

The Globe and Mail, however, might end up using one from the swearing in. That one showed Kelly Knight addressing the audience. To her left is Governor Matt Bevin. And just to the Governor’s left was Indiana Governor Mike Pence. The same Mike Pence who is now the U.S. Vice President. 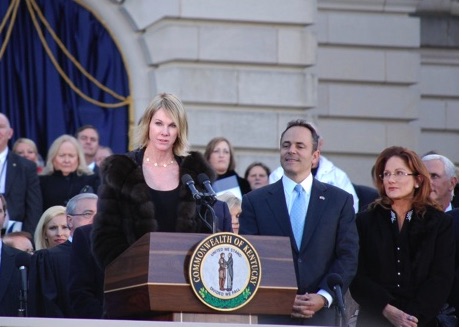 The picture will also make the rounds in Canada as a newsmagazine emailed Wednesday evening for permission to use the same photo.