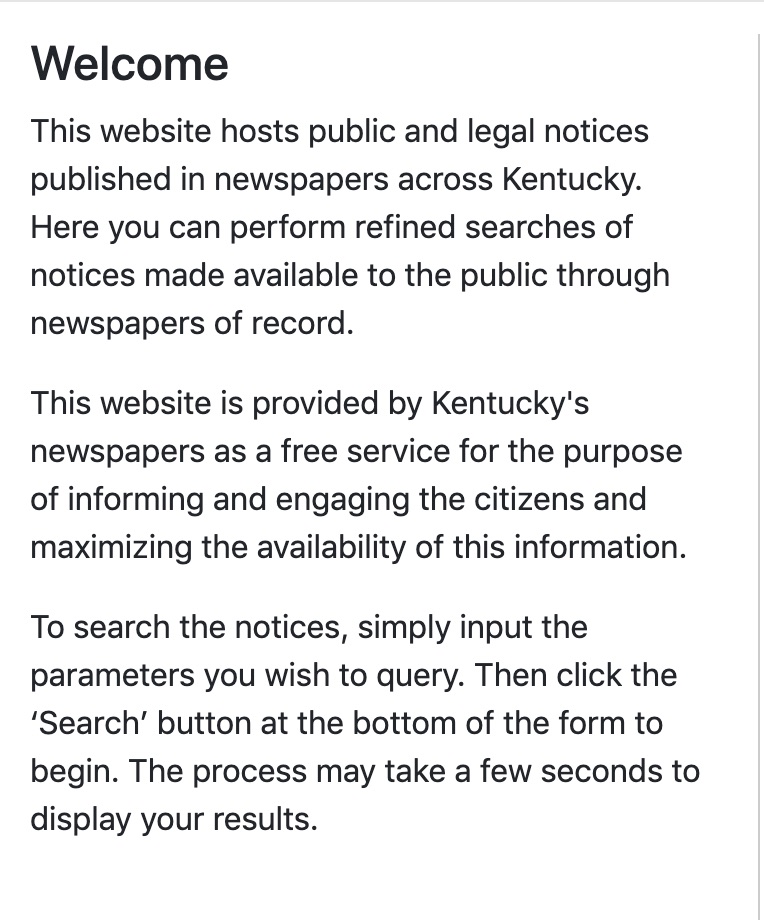 For the last 11 years, the Kentucky Press Association and its member newspapers have posted public notices on an internet website. That was a project of then KPA President Jamie Sizemore. The website has remained basically the same in that time but this week an upgraded website was launched.

The new public notice website allows anyone to search by a key word(s) for any notices printed in Kentucky newspapers. The notices are required first to be printed in a qualified newspaper and then each newspaper uploads each edition to NewzGroup that then scrapes public notices and posts them on the website. There is no cost to newspapers for this service and the public can access the public notice site without a fee.

KPA will be checking the most recent uploads by newspapers and will notify any newspaper that is absent from posting. Instructions on uploading to the ftp site will be given along with the newspaper’s login specifics.

Newspapers that are posting the link to the site on their own websites, under SEARCH PUBLIC NOTICES, need to change the link to https://kypublicnotice.com/ so the public is directed to the updated site.

The new site also includes statements about the importance of public notices being published in Kentucky newspapers including information from the Public Notice Resource Center. Those statements show up by clicking on the rotating heading at the top of the page. 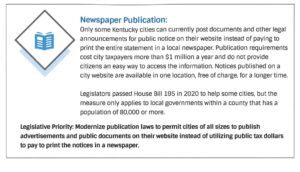 (Shown is the Kentucky League of Cities argument that public notices should be published on local government websites as opposed to newspaper publication. The argument that public tax dollars should not be used to pay for publishing isn’t accurate. Putting notices on government websites is just as costly, if not moreso, than publishing these in newspapers. And it still allows a local city government to control what, when, how and where on a website a public notice appears. Plus with the KPA supported public notice website, no government agency is charged for notices that appear and can be word-searched making finding specific public notices easier.)

It’s important that newspapers upload their entire editions so all public notices can be scraped by NewzGroup and posted on the website. As an annual event, the Kentucky League of Cities is requesting the Kentucky General Assembly “modernize” the public notice statute (KRS 424) that would allow public agencies to post their notices on a government website instead of publishing in the newspaper.

We need KPA members to contact their State Senators and Representatives about the importance of having a third party involved and that no government agency should be allowed to determine when, what and how any notice is presented. Think about your own county. Would the public want to have to search the websites of each and every public agency in the county for what the government agency is up to? How easy would it be for cities and counties and school boards to “hide” public notices are into a website? We’ve already seen that question answered numerous times by local school boards.