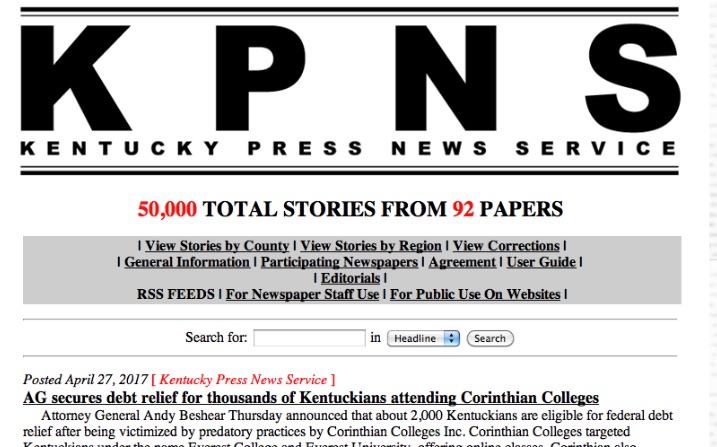 It’s less than eight years old and even took several months before Kentucky newspapers grasped the idea of a news content service that supplied them with stories from across Kentucky and also sharing stories from those same newspapers with others.

Twenty newspapers signed on originally and a once-a-day budget of stories seemed in order. Then it went to 30 and 40, reached 50 participating newspapers and continued exploding.

You can see from the graphic above that KPNS now has 92 newspapers participating. As of about noon Thursday (April 27), David Greer posted the 50,000th story on KPNS. And that doesn’t include another 5,600 or so editorials.

After the p.m. budget, David posts a a third budget — the editorial budget  — that could carry four to six opinion pieces each day.

While it’s dark on Saturdays (no service) a Sunday morning budget is posted so KPNS does not lose any of the weekend stories that could otherwise be lost on newspaper websites if we wait til Monday.

KPNS originated from a News Editorial Division meeting in Elizabethtown when several editors complained about the lack of stories being made available and the costs associated in some cases of getting the stories.

It led to a “what if” meeting of the three Davids — David Greer, David Spencer and yours truly. “What if” we created some kind of network where newspapers could share their stories for other newspapers to use.

So we took the discussion further, standing around David Greer’s office door and tried to develop a process that newspapers would post their own stories to a website. KPA’s only involvement would be making the website available.

Then reality set in. Newspapers are not going to assign someone to post their stories, it would have to be done for them. We knew the time involved for a newspaper to do that would discourage them from posting. Plus some might post every story in the newspaper while the interest was in finding the best stories of the day, the biggest stories of the day and posting them.

We decided then if it’s going to be done, KPA would have to do it. Probably a month after the initial meeting around David’s office door, we launched Kentucky News Content Service. That was October 1, 2009.

Today, it’s the Kentucky Press News Service, a name more reflective of what it is, a news service.

If you aren’t signed up as a participating newspaper, contact David Greer at dgreer@kypress.com