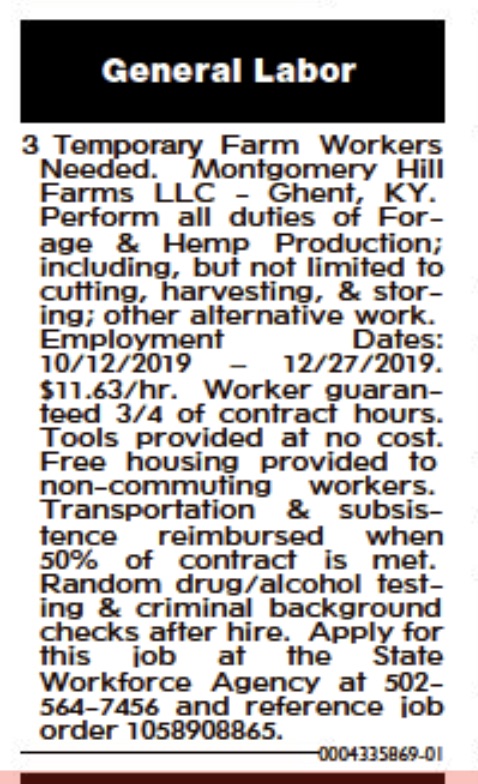 This is an example of a General Labor ad that will be taken from newspapers and placed on the Labor Department’s own federal registry website under new rules being adopted.

Many of our member newspapers get classified ads from local agriculture businesses seeking help. Often these are in the Classifieds Section under “general labor,” looking for help in the spring for planting tobacco and in the fall for cutting and housing tobacco. The program isn’t limited to just tobacco but numerous farm-related jobs where help has been difficult to find. The ad at the right, one of many published regularly in many KPA newspapers, is for hemp production, one of the newer needs for agricultural-related businesses.

The federal rules typically required these businesses to run the ads in a Sunday edition and in one or two other issues during the week. Some weeklies benefited even without having a Sunday edition because the local farms/businesses had a relationship with the newspaper. Some were quite lengthy in text. The ads always required individuals to contact State Workforce Agency to apply. However, the ads being federally-required took any responsibility for publishing out of the state agency’s hands.

It’s been rumored for quite a while that the federal government was considering taking those classifieds out of newspapers and moving them to the internet. That came true this week with a new order. In fact, taking them out of newspapers is going to benefit the US Department of Labor since it will require these notices be published in the federal registry. There is a small caveat, though, that might allow some local Ag offices to accept ads published in newspapers.

Below is a note from Tonda Rush, general counsel for the National Newspaper Association, along with a pdf copy of the revised order and then a link to Thursday’s Federal Register with the new rules published:

“The Labor Department has rejected the industry’s argument on keeping H 2A worker public notices in newspapers.  Instead, it is giving the business to itself, putting the notices in its own federal job registry.

“Many thanks to all who submitted comments. It is just hard to overcome the mindset at federal agencies once these proposals get legs.

“Many thanks also to Paul Boyle, with the News Media Alliance who picked up the decision and shared it a day before official release.  Paul’s computer is rebelling against the agency’s lack of good sense and won’t send emails, so he asked me to let NAMers know.

“NMA and NNA both provided detailed comments on this proposal.

“You’ll see the final rule in Federal Register.  Note that it gives local offices discretion to accept the ads in compliance if they see fit. Some small glimmer for those with relationships in the Ag offices.”

Here is the Federal Register from September 19, 2019, with the new rule so stated:

Of specific reference is Subparagraph C. as reprinted below:

C. Summary Of Proposed Changes To The Recruitment Requirements and The Changes Adopted In This Final Rule

On November 9, 2018, the Department issued a Notice of Proposed Rulemaking (NPRM) announcing its intent to modernize the recruitment that an employer must conduct in conjunction with an H-2A application. See 83 FR 55985 (Nov. 9, 2018). Specifically, the Department proposed to eliminate the requirement that every employer advertise its job opportunity in a print newspaper and replace it with a requirement to post an electronic advertisement on a website.

The Department invited interested parties to submit written comments on all aspects of this proposal, including a variety of issues related to the electronic advertising requirement. The Department also solicited comments as to whether there were alternative methods of recruitment that would more broadly and effectively disseminate information about agricultural job opportunities to U.S. workers. The Department originally stated that it would accept comments through December 10, 2018, but in response to a request for an extension, it subsequently extended this period through December 28, 2018. The public may review all comments that the Department received in response to the NPRM in the Federal Docket Management System (FDMS) at http://www.regulations.gov, docket number ETA-2018-0002.

Upon careful consideration of the comments that it received, the Department has decided to adopt its proposal to transition to electronic advertising with several changes. Specifically, this final rule adopts the NPRM’s proposal to eliminate the existing requirement for most employers seeking H-2A labor certification to advertise their job opportunities in print newspapers of general circulation in the area of intended employment.  (Emphasis added.) The Department’s transition to electronic advertising will not require an employer to place an electronic advertisement on the internet in the manner proposed in the NPRM. As explained in detail below, the Department will instead advertise all H-2A job opportunities by posting them on SeasonalJobs.dol.gov, the expanded and improved version of the Department’s existing electronic job registry. This final rule further strengthens the labor market test by enhancing the existing role of the SWAs in conducting outreach activities. Specifically, this final rule allows the CO to direct a SWA, where appropriate, to offer written notice of an employer’s H-2A job opportunity to organizations that provide employment and training services to workers who are likely to apply for the job and/or place written notice in other physical locations where such workers are likely to gather.