Larry Rowell: Central Kentucky mourns death of a pastor who was also a newspaper editor, and a good one

From The Rural Journalism Blog

To some, the simultaneous roles of rural newspaper editor and church pastor might seem incompatible, but some have done it successfully. Last week, Central Kentucky said goodbye to another who did: Larry Rowell. 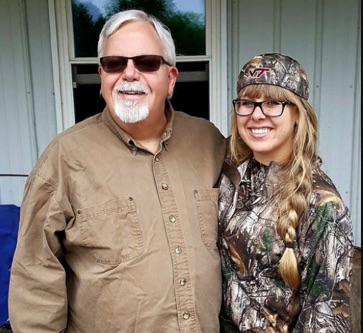 Larry Rowell and Abigail Whitehouse as they ready for a dove hunt.

Rowell, 63, died of pancreatic cancer Jan. 25. He had been editor of The Casey County News in Liberty, interim editor of the Greensburg Record-Herald, and between those towns, pastor of Beech Grove Baptist Church in Black Gnat and minister of education at Campbellsville Baptist Church. He had a master’s degree from the Southern Baptist Theological Seminary, a journalism degree from Western Kentucky University and a criminal-justice degree from Valdosta State College in his native Georgia. He and his wife Edwina, who survives him, had been missionaries in West Africa.

Larry was also a member of the Board of Directors of the Western Recorder, the publication arm of the Kentucky Baptist Convention.

“Larry came loaded for bear when he started working for The Casey County News,” a Landmark Community Newspapers weekly, as staff writer, columnist Joberta Wells wrote. “It would be safe to say that he knew half the citizens of the county, and they knew him, before he had been here two or three months. He got involved in every activity held, not just because he was a writer and the editor of the paper. He was genuinely interested in the people of this county and made friends wherever he went.”

Making friends is helpful for an editor, but Rowell told reporter Abigail Whitehouse, “Abs, if someone somewhere isn’t pissed off at us, then we ain’t doin’ our jobs right.” Whitehouse, who went on to edit The Interior Journal at Stanford, put together a two-page newspaper to honor her mentor, with Wells’s tribute and others; read it here. “He treated sources with compassion, but he never avoided the tough questions,” she writes. “I can still hear him now yelling at an attorney at 8 p.m. on a Tuesday night, ‘It’s a simple question. If I were you, I’d answer it before tomorrow morning.'”
As a pastor, “He didn’t force his faith on you,” Wells recalled. “He just let it wash gently over you.” Expressions of sympathy are requested to be donations to Beech Grove Baptist Church or Baptist Global Response, and may be made through Parrott & Ramsey Funeral Home in Campbellsville.