Leaders in rural journalism from coast to coast to be honored at annual Al Smith Awards Dinner in Lexington Oct. 28; Chuck Todd of NBC News will be keynote speaker 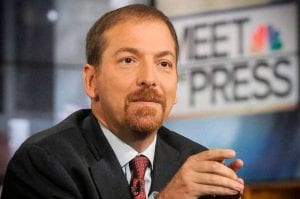 The dinner was not held last year due to the pandemic, so this year’s  will honor two years’ worth of winners – of the Tom and Pat Gish Award for courage, tenacity and integrity in rural journalism, presented by the Institute for Rural Journalism and Community Issues; and the Al Smith Award for public service through community journalism, presented by the Institute and the Bluegrass Chapter of the Society of Professional Journalists.

The winner of the 2020 Gish Award was the late Tim Crews, First Amendment advocate and crusading editor of the Sacramento Valley Mirror in Willows, Calif. His widow, Donna Settle, plans to accept the award.

The 2020 Smith Award will be presented to Becky Barnes, editor of the Cynthiana Democrat, who published an extra edition that was mailed to everyone in Harrison County when it had the state’s first reported case of Covid-19, and has demonstrated many other examples of community service through editorial leadership.

The 2021 Gish Award will go to the Thompson-High family of Whiteville, N.C., which shared the first Pulitzer Prize won by weekly papers and has more recently held local officials accountable while adapting to the digital era. Les High, who recently sold The News Reporter to his editor but remains at the paper, will accept the award.

The 2021 Smith Award will go to the public-radio newsroom of WKMS-FM at Murray State University, for providing local and regional news coverage in Western Kentucky at a time when newspapers are doing less of it. This marks the first time that the Smith Award has gone to broadcasters.

The Tom and Pat Gish Award is named for the late couple who published The Mountain Eagle in Whitesburg for more than 50 years and repeatedly demonstrated courage, tenacity and integrity through advertiser boycotts, business competition, declining population, personal attacks, and the burning of their office.

The Al Smith Award is named for the late Albert P. Smith Jr., who published weekly newspapers in Kentucky and Tennessee, was federal co-chair of the Appalachian Regional Commission, and was best known as founding producer of “Comment on Kentucky,” the weekly public-affairs show on Kentucky Educational Television. He died March 19, making this the first Smith Dinner without him.

“The dinner is a grand gathering of people who believe in journalism as an essential element of democracy and want it to observe high standards; who recognize the importance of rural America to the rest of the country; and who agree with us that rural Kentucky and rural America deserve good journalism just as much as the rest of the state and nation,” said Al Cross, director of the Institute. “We hope to have a good crowd to honor these winners and hear from them and Chuck Todd, who has an appreciation for rural America.”

Due to the pandemic, the 6 p.m. reception will be held outdoors, the 7 p.m. dinner will have limited seating, masks will be required when not eating or drinking, and anyone who is not fully vaccinated against the coronavirus should not attend. For non-SPJ members, tickets for the dinner are $125 each and table sponsorships are $1,000. Major sponsors of the event are the Kentucky Electric Cooperatives and Emily Bingham of Louisville. Information on ticketing and other details will be available soon on the Institute’s website, www.RuralJournalism.org, and the Facebook page of the Bluegrass SPJ chapter.