Legacies in KPA from the 1945 directory 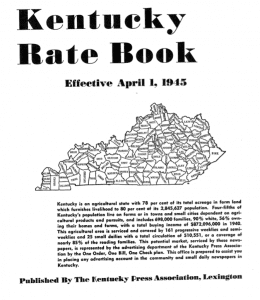 At the right is the front cover of the 1945 KPA Directory, or rather “Rate Book” as they were called back then. The rate book was printed in manilla folder format but heavier weight paper and inside was just 12 pages containing information about Kentucky newspapers.

Scan the 1945 KPA Directory and you’ll likely recognize a few names. At least four of those help form a “Legacy” within the association.

There in 1945, you’ll find the name J. Frank Nolan as publisher-editor of the Union Messenger and News in Hazard. Go a few newspapers more and the name W. P. Nolan appears for the Neon News in Letcher County. Also listed for the Mountain Eagle in Whitesburg.

If the name Nolan rings a bell, well it should. President of KPA in this our 150th anniversary year is Jay Nolan.

I contacted the three — Jay Nolan, Alan Gibson and Earl Kinner — to get some information about the listings from 1945.

The J. Frank Nolan listed for the Union Messenger and News in Hazard is my Grandfather, James Frank Nolan Sr.
The W.P. Nolan listed for Neon and Mountain Eagle was my Great Uncle “Pearl” Nolan, my Grandfather’s oldest brother (There were 13 siblings in all.)
We are not sure if he sold the paper directly to the Gish family, or if there was another owner(s) in-between.
Interestingly, my Grandfather’s paper in Hazard, and the current day Hazard Herald were the only two remaining from 5 newspapers there that had existed in the boom days of coal. My Grandfather bid for and won the Hazard Herald.  But when Pearl found out, he was upset. Seems he wanted it  – badly.  So, my Grandfather let his older brother “Pearl” actually fund the bid he had made, and let Pearl take over the Hazard papers. Pearl ran them for a long time, I think into the late 1960’s or early 1970’s. (My Dad believe’s Pearl’s first name was William, but not sure as he always just went by Pearl.)
After some time working with Pearl, in Hazard, my grandfather J. Frank Nolan, moved into Clay County.  (Now you know how, J. Frank Publishing, Inc, our commercial printing plant, which is an associate KPA member today, came to be named,) He started a paper there, the Clay County News, and in 1952 or ‘53 , bought out the other paper, the Manchester Guardian. That paper was owned by Garvice Kincaid of Lexington, and he bought it with funds loaned to him by Kincaid’s Central Bank!  He combined both newspapers, and named the surviving publication the Manchester Enterprise.
The rest is history.
Earl Kinner Sr., from his son Earl, Jr. on the Licking Valley Courier and Elliott County News listing
Earl Kinner, listed as publisher-editor of the Licking Valley Courier and Elliott County News in 1945. Many of us remember the tornado of 2012 that devastated West Liberty and as Earl Jr. notes, the storm destroyed all records and corporation minutes so exact dates are not available. In that directory, the Wolfe County News was not under the Kinner family flag.

My father Earl. Sr., acquired The Licking Valley Courier (incorporated as the Courier Publishing Co., Inc.) in 1944-1945. The Elliott County News was established circa 1951-52.  The Wolfe County News was acquired  circa 1957;  The tornado of 2012 in West Liberty destroyed all records, corporation minutes, etc., thus cannot give exact dates.

—Earl W. Kinner, Jr.
A.B. Gibson, listed as publisher-editor of The New Era in Albany; from his son Alan B. Gibson, publisher-editor of the Clinton County News in Albany
Dad went to work for W.H. “Spider” Nunn when he was in high school – 1935 – at the New Era.  Like was most always the case then, the New Era also did commercial printing.  At one point, my Dad and Mr. Nunn formed a second printing company, Gibson and Nunn Show Print, where they specialized in printing large posters for circus companies, theatres and traveling musical entertainment show companies, eventually having customers from several states.
When Mr. Nunn died in 1942, Dad leased the New Era from his widow, Ella Nunn, and operated it by himself for several years.  A few years later he left the New Era while his widow, Ella Nunn, ran the newspaper.  After a short stretch away from the newspaper and printing field – Dad worked as an accountant for the construction firm that built Wolf Creek Dam –  he and my mother, Nell Gibson, formed Gibson Printing Company, a commercial job printing operation.  A short time later, at the urging of several community members, they started the newspaper, Clinton County News in November, 1949.  A few years later, 1955 I think, they purchased the New Era and it ceased publication.  For many years, below the nameplate, were the words “Consolidated With The New Era.”