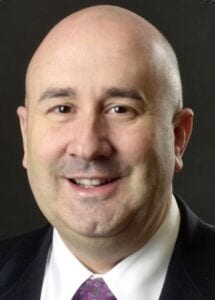 (Editor’s Note: During his testimony, Kentucky League of Cities executive director J.D. Chaney noted the success of legislation in 2018 that addressed police body cams. He mentioned the groups involved, including the Kentucky Press Association, and that the KLC continues to support the legislation. He said several other states have contacted him about Kentucky’s law, how KLC got that language passed and who was involved, and that Kentucky’s law is being used as model legislation in other states. Here is a link to House Bill 373, sponsored by Rep. Robert Benvenuti III during the 2018 session — https://apps.legislature.ky.gov/recorddocuments/bill/18RS/hb373/bill.pdf)

FRANKFORT – A committee of state House and Senate members took testimony today on the pros and cons of legislation mandating police body cameras in Kentucky.

“If we are going to put a mandatory program for body cams in this state, we have to look at the funding,” said University of Kentucky Police Chief Joe Monroe while testifying before the Interim Joint Committee on Judiciary. “There would be small agencies in this state who would not be able to afford these types of programs.”

South Carolina and Nevada are the only states currently requiring body cameras for police officers, said Monroe, who is also the first vice president of the Kentucky Association of Chiefs of Police. He said at least 24 states have laws governing required policy, storage or specific procedures regarding the public release of body camera footage.

Committee Co-chair Rep. Jason Petrie, R-Elkton, asked what the annual cost would be to equip an officer with a body camera. Monroe estimated between $1,500 and $1,800 per officer for a “low-cost camera.” He said newer, more advanced body camera technology could run up to $5,000 per officer.

Daviess County Sheriff Keith Cain testified it would cost an estimated $50,000 to equip 30 deputies with body cameras in his department. He added the major expense is the hidden reoccurring costs related to storage, maintenance and the additional staff to manage it all. Cain said that was estimated to be $40,000 annually.

Petrie then asked if body cameras were worth the cost to taxpayers. Monroe said he strongly encouraged the use of body cameras. “I believe in them,” he said. “I believe the investment in them is worth it.”

Cain, who also spoke on behalf of the state sheriff’s association, said the vast majority of Kentucky sheriffs would love to have the transparency that body cameras provide. He added that budgetary issues keep many small- and medium-size departments, including his own, from acquiring those cameras.

“If this is something the General Assembly thinks should happen, and I personally agree that it should, I would hope that this body would start by looking at where that money would come from because most of the communities in Kentucky will not be able to afford them,” Cain said.

Kentucky League of Cities CEO J.D. Chaney testified that his organization has historically been against unfunded mandates but that the organization generally supports the use of police body cameras. He added that body cameras could also reduce insurance premiums for municipalities, many of which are insured through the league.

Sen. Robin L. Webb, D-Grayson, asked what departments could do to ensure officers equipped with body cameras used them. Monroe said that is done through policy and training.

Sen. John Schickel, R-Union, said requiring every police officer to wear a body camera isn’t going to be the cure-all when it comes to building trust between police departments and the communities they serve.

“A lot of people think politicians are corrupt, but do we want a camera in the Senate president’s office, or the governor’s office, or my office, to make sure we do everything right every day?” said Schickel, a former law enforcement officer. “Where does this all stop?”

In addition to the costs, Monroe said the negatives associated with body cameras include the fact that the footage does not capture the officer’s mindset based on what he or she perceived was occurring. 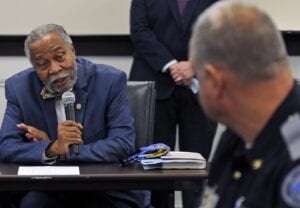 Sen. Gerald A. Neal, D-Louisville, asked about the benefits of body cameras. Monroe said they include better transparency, improved trust, reduced citizen complaints and the phenomenon of the “civilizing effect.” It’s a term referring to individuals engaging in more civil behavior toward each other when they know they are being recorded.

“They use the opportunity with the video that is taken from those body cameras to support their officers and to put positive stories out,” Carroll said. “They have been a value to them in that way.”

He asked where the technology of body cameras was heading. Monroe said his department was exploring the possibility of cameras providing live, real-time video to dispatchers.