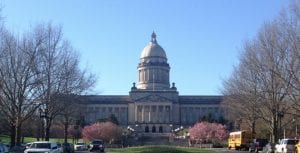 Minutes before the stroke of midnight Thursday, March 28, the 2019 Kentucky General Assembly session came to a close. Throughout the day, legislators put final touches on a number of bills that had not yet made it through the process in the previous 29 days.

Some of the final day was spent in recess, as discussions took place on what the final shape some bills would take, as well as honoring all kinds of athletic teams, from high school champions to the NAIA National Champion Georgetown College Tigers. They also recognized LRC interns for their work during the session and education honors for college students.

Any bills passed on Thursday can be vetoed by the governor without a chance for the legislature to override those vetoes. So veto action by the governor on any last-minute bills will stand.

Barring an unforeseen special session between now and the end of the year, the General Assembly won’t return to Frankfort until Tuesday, January 7, 2020, for its 60-day regular session.

It appears legislation that KPA worked on, either in support, in changing language to get KPA’s support and especially lobbied against such as attacks on the public records, ended up as we hoped. Approved, if supported or amended to KPA’s satisfaction, or not having final action taken if KPA opposed. We’re still assessing the final language because who knows what last minute tricks might have taken place as the stroke of midnight approached and will issue a final report in the near future.

Below is an assessment from the Legislative Research Commission on some of legislation that made it through both chambers and to the governor’s desk.

From the Legislative Research Commission

The final week of the 153rd regular session of the Kentucky General Assembly saw the ceremonial signing of a sweeping measure to enhance school safety that is widely considered many lawmakers’ highest-priority bill of the year.

The School Safety and Resiliency Act, or Senate Bill 1, was among more than 200 bills that had passed by the time the 30-workingday session ended this evening.

SB 1 was the product of a specially formed committee that traveled the state last year to discuss school safety and collect feedback. The measure will create a state security marshal to conduct onsite visits to ensure schools were compliant with all provisions of the omnibus bill. The goal of SB 1 is to improve student safety by boosting safety and prevention training, promoting the assignment of a school resource officer to every school, increasing awareness of suicide prevention efforts, encouraging collaboration with law enforcement and hiring more counselors in school districts. Legislative leaders said funding the provisions of the bill are expected to be a priority when lawmakers put together the state’s two-year budget next year.

Most new laws – those that come from legislation that doesn’t contain emergency clauses or special effective dates – will go into effect in late June.

A partial list of bills that the General Assembly approved this session includes measures on the following topics:

Abortion. House Bill 5 will make it a felony to perform an abortion due to a decision based on the unborn child’s gender, race, color, national origin or disability. Senate Bill 9, known as the fetal heartbeat bill, will prohibit abortion in Kentucky once a heartbeat is detected in an unborn child. (A federal judge in Louisville has issued temporary restraining orders blocking enforcement of SB 9 and HB 5 after lawsuits were filed challenging the measures.) Senate Bill 50 will require health providers to report prescriptions written for RU-486 or any drug intended to end pregnancy to the state. House Bill 148 will outlaw abortion in Kentucky in most cases should the landmark Roe v. Wade ruling be reversed.

Budget. House Bill 268 authorizes $25 million in bonds for economic development and $50 million in bonds for state parks to be spent on emergency repairs on everything from leaky roofs to backed-up sewers. It would also provide $290,000 for Kentucky State University to match federal money available to land-grant universities.

Concealed carry. Senate Bill 150 will make Kentucky the 16th state to allow concealed firearms to be carried without a concealed carry permit. The measure will allow Kentuckians age 21 and older who are legally eligible to possess a firearm to carry a concealed weapon without a license in the same location as people with valid state-issued licenses. Permitless carry will not be allowed where prohibited by federal law or otherwise prohibited.

Drunken driving. Senate Bill 85 will expand the use of ignition interlock devices (IID), Breathalyzer-type devices connected to the ignition systems of vehicles of people convicted of driving under the influence (DUI). The measure will do this by allowing and incentivizing IIDs for all people charged with a DUI and shift administration of the program from the courts to the Transportation Cabinet. SB 85 will also move Kentucky toward a more compliance-based model, in which offenders would have to complete a 120-day period of sober driving before exiting the court-mandated program.

Elections. House Bill 114 will require candidates for state offices and most local offices to officially declare their candidacies via “statement-of-candidacy” forms no later than the last Tuesday in January preceding the general election. The current deadline is April 1. Amendments to the measure will also remove the Secretary of State as a voting member of the State Board of Elections and will make it a misdemeanor if an election official willfully misuses the state’s voter registration roster. Senate Bill 4 will require mandatory electronic filing of all candidates’ campaign finance reports by the May 2020 primaries.

Felony expungement. Senate Bill 57 will expand the number of Kentuckians eligible to have low-level felonies expunged from their criminal records. It will do this by expanding discretionary expungement to all Class D felonies with some exceptions for crimes such as stealing in office, abusing children and sex abuse. It includes a five-year waiting period to apply for expungement, a $250 application fee and provisions for prosecutors to object and judges to reject the applications.

Foster children. House Bill 158, dubbed the “foster child bill of rights,” grants 16 rights for children in out-of-home placement in Kentucky, including rights to “adequate food, clothing and shelter,” “a safe, secure, and stable family,” and “freedom from physical, sexual, or emotional injury or exploitation.” The legislation will also reduce the time for a parent or guardian to consent to voluntarily placing a child for adoption from 20 days to 72 hours. Senate Bill 31 will ensure children in out-of-home care have visitation rights with their siblings. The measure will do this by requiring the Cabinet for Health and Family Services, in the case of siblings removed from their home and not jointly placed, to provide for frequent visitation or other ongoing interaction between the siblings.

Government contracts. House Bill 135 will prohibit public agencies from requiring that their contractors on public works projects have agreements with labor organizations.

Hemp. House Bill 197 will expand the legal definition of hemp to include the seeds of industrial hemp, derivatives, extracts, cannabinoids and isomers, among other components. That is the same definition found in the new U.S. Farm Bill, signed into law late last year, which removed hemp from the federal Controlled Substances Act.

Kinship care. House Bill 2, dubbed the kinship care bill, will create a caregiver assistance program for relatives and “fictive kin” – usually close family friends – of abused, neglected or dependent children. The measure will do this by offering different options to the caregivers based on the level of care they provide. HB 2 is designed to address a growth in out-of-home placement of Kentucky children amid the state’s current opioid crisis.

Lobbying. Senate Bill 6 will require disclosure of executive agency lobbyist compensation. The measure will also prohibit compensation contingent on awarding of a government contract. It will provide oversight, in part, by requiring executive branch lobbyists to register and list their clients. That’s already required of legislative lobbyists.

Midwives. Senate Bill 84 will recognize, certify and regulate home-birth midwives in Kentucky. The measure would create a council to advise the state Board of Nursing on the creation of regulations regarding qualifications, standards for training, competency, any necessary statutory changes and all other matters relating to certified professional midwives.

Pensions: House Bill 358 will give regional state universities, community colleges and “quasi-governmental” agencies like health departments and mental health boards a chance to leave the Kentucky Employees Retirement System (KERS) as of June 30, 2020, by paying their unfunded liability to the system in a lump sum or installments. Postsecondary institutions and quasi agencies that decide to stay in KERS will have to pay the full retirement contribution rate to the system starting in July 2020.

Solar energy. Senate Bill 100, dubbed the net metering bill, will change how much owners of solar power systems are reimbursed for electricity they add to the power grid. Under the bill, the Public Service Commission will set the compensation rate. The measure will grandfather in those participating in the current net metering structure for 25 years. In addition, those who install solar panels within the next year will be covered by the grandfather clause.

Student loan debt. House Bill 118, named the Keep Americans Working Act of 2019, will prohibit someone from having an occupational license suspended or revoked because of delinquency on a student loan or work-conditional scholarship. The measure is meant to help keep people with student loan debt out of poverty and in the workforce.

Taxes. House Bill 354 will provide tax relief to banks and nonprofits in addition to strengthening Kentucky’s ability to collect sales tax on online purchases. The measure will transition the taxation of Kentucky-chartered banks from a franchise tax to state corporate income tax in an attempt to curb the takeover of community banks by banks from states with lower tax rates. Another section of HB 354 will provide relief to nonprofits by exempting those groups from collecting and remitting sales tax on admissions to charity events in addition to making it clear in statute that sales from one-time fundraising events are not subject to the sales tax. Thirdly, HB 354 will increase tax revenue by requiring online marketplace providers to collect and remit sales tax for sales made using their platform.

Tobacco. HB 11 would ban the use of tobacco, e-cigarettes and vaping devices on public school campuses, in school vehicles and at school activities beginning with the 2020-21 school year. School districts would have up to three years to opt out of the ban should they choose. The individual districts not opting out will also be able to set the penalties for violating the ban.