Lexington decision to not recycle paper products, including newspapers, affects much of Central Kentucky 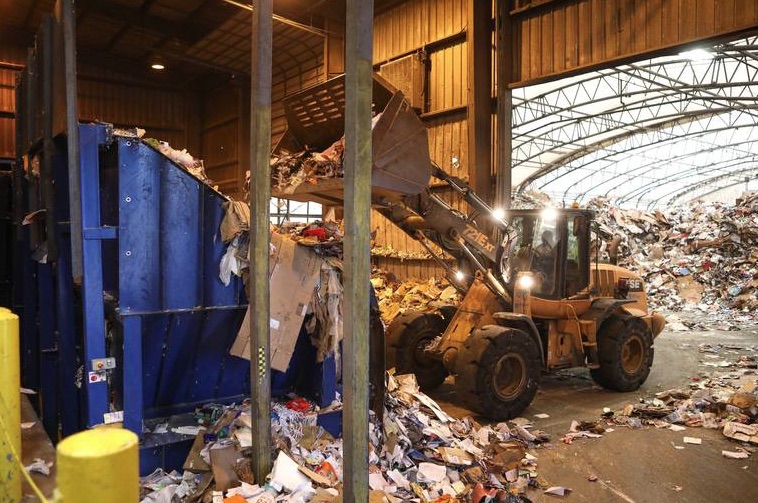 Items were moved for sorting Thursday at the Lexington Recycling Center. Photo by MATT GOINS

That means office paper, newspapers, magazines, cereal boxes, paper rolls and other paper-based products should be put into trash cans rather than recycling bins, said Nancy Albright, the city’s commissioner of Environmental Quality and Public Works.

For the past several months, the city has given away its recycled paper because there are so few buyers after a change in the global marketplace.

Dry corrugated cardboard — such as moving and shipping boxes — will still be accepted. The city can not recycle wet cardboard.

The city hopes the move is temporary and is looking for other markets for recycled paper, Albright said.

“At least three new nearby mills are expected to begin receiving materials by late fall of 2019,” she said.

Many cities across the country have suspended recycling operations all together after China upped its standards for the cleanliness of recycling materials it would buy, upending the market for recycled products.

Albright said the city is trying to determine if it might also be cheaper to temporarily suspend recycling glass. Currently, the city pays a company to pick up glass. Glass can also tear up equipment, leading to costly shut downs at the recycling center.

“We hope a decision on that will be made within the next month,” Albright said.

Those figures do not include how much it would cost to haul those recycled goods to the landfill.

The Lexington-Fayette Urban County Council recently formed a subcommittee to look at its recycling operations as the market for recycled goods remains in flux.

In addition, the city has upped its public outreach to encourage people to “recycle right,” a move designed to keep non-recyclable goods out of the city’s recycling center. Items that can not be recycled — including garden and other plastic hoses, plastic bags and medical waste — can damage the recycling center’s equipment, increasing costs.

Lexington’s senior program manager for recycling gives tips on how cope with decision
Beth Musgrave has a follow-up story on how those affected by Lexington’s action to not accept paper products can cope with the decision by reducing paper waste.
Access that story here: https://www.kentucky.com/latest-news/article230420774.html