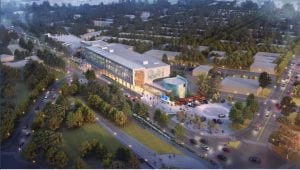 CRM Companies had proposed renovating and expanding the Lexington Herald-Leader building at Main and Midland in downtown Lexington for a new city government building for Lexington. CRM was one of four developers who responded to a request for proposals for a new city hall.

Without a consensus in place, the Lexington/Fayette Urban County Council voted down a proposal that would have moved city hall to the Lexington Herald-Leader building.

Here’s the story by Beth Musgrave about the council’s action Thursday night: https://www.kentucky.com/latest-news/article218322530.html

A city committee has selected the Lexington Herald-Leader building as the site of a new government center to replace its aging downtown city buildings on Main Street.

A committee of Lexington city employees chose the proposal by CRM Companies. That proposal is to gut and expand the Herald-Leader building at 100 Midland Avenue for a new city government building. Those plans include adding a multistory parking garage and an addition on the front of the building for a new police station.

CRM Companies has an option to buy the Herald-Leader building.

The selection was announced at a Lexington-Fayette Urban County Council meeting Thursday. The city would lease the building no longer than 35 years and own the facility land after those 35 years, said Bill O’Mara, the city’s finance commissioner.

Read the rest of that June 7 story at  http://members.kypress.com/articles/committee-selects-herald-leader-building-for-new-city-hall/