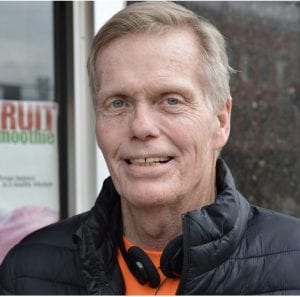 Herb Brock, a man known for giving a voice to those who otherwise would not have one, died this week. He was an Advocate-Messenger staffer from 1979 until he retired in 2010, and his career was something that he was very proud of. His son, David Brock, says as strange as it sounds to say about such a wordsmith, there really are no words to describe what the job meant to his dad.

“But he was always — what was most important to him, family first — always,” David said. But that “doesn’t mean just us,” he said, sitting next to his mom, Jerry Brock.

They have a pretty small, nuclear family, he said. “But he had such a depth of care and love for everybody he was related to, and not just by blood. He carried all of the people who he had loved and who had loved him in his heart …”

Herb’s wife and son said out of all of his accomplishments, he was probably most proud of the Rally on the Square events, held in Constitution Square Park. “He created a place in Danville where you had to come if you were going to seek a high office in the state of Kentucky, and everybody did come. He was very happy that was embraced,” David said.

The first one was in 1987. Jerry recalls the Oshkosh overalls she adorned with a red, white and blue “VOTE” patch across the front that a 6-year-old David wore. He still has some of the old-timey hats, covered in stickers and buttons from all the politicians.

The event connected to Herb’s dream. “A dream of his was to bring something to Danville that would be important … for the entire state of Kentucky, and to do it in a way that was professional,” David said. Herb scheduled a brass band to play during the first rally, which ultimately lead to a chain of events creating the Great American Brass Band Festival. Jerry says they even got him up on stage to acknowledge him during the first few festivals.

Here are two stories about Herb, including one from the Advocate-Messenger’s Progress Edition, where Herb is referred to as a “Community Treasure” by former Danville editor, John Nelson.

Visitation for John (Herb ) Herbert Brock II, 70, of Danville, will be 4-8 p.m. Monday, Sept 16 at Stith Funeral Homes in Danville. The funeral service will be at 10 a.m. Tuesday, Sept. 17 at Trinity Episcopal Church.