Looking for a Kentucky-based editorial cartoonist? 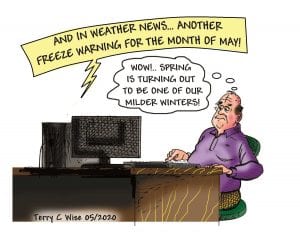 From time to time, newspapers call or email asking about any editorial cartoonists who might be in syndication that they can use for their editorial pages. Typically, the answer is, “No, we’re not aware of anyone.”

But in the last several weeks, a Kentucky-based cartoonist, Terry Wise, has been sending out samples of his work. Terry got started in the 1980s, with cartoons for the Elizabethtown News Enterprise. He did for a while and then self-syndicated about 10 years later. I reached out to Terry to get information just in case any of our newspapers are looking for a Kentucky-based editorial cartoonist.

“I provide 3 to 5 cartoons a week, and as often as possible I make them KY focused, and offer a once a month custom drawn cartoon about local issues for my papers to use.  I run the subscription from January through June, July through December, for $80 per paper per 6 months; about $13 a month for about 20 cartoons emailed, run them any way the paper choses. I’m always looking to expand into daily and small papers.  Right now, I’d send them to interested publications through May and June at no cost.”

If you are interested in reaching out to Terry, you can email him at terry.wise@comcast.net or call him at 270-765-8483. 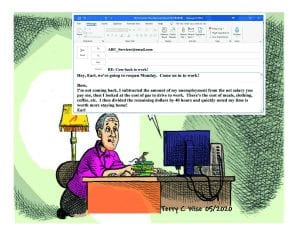 Here’s the text on the cartoon at the right:

I’m not coming back. I subtracted the amount of my unemployment from the net salary you pay me, then I looked at the cost of gas to drive to work.  There’s the cost of meals, clothing, coffee, etc.  I then divided the remaining dollars by 40 hours and quickly noted my time was worth more staying home!