By Ed Green, Board Chair, The Louisville Cardinal

Ed Green, vice president of C2 Strategic Communications, is the 2019-20 board chair of The Louisville Cardinal Inc., an independent nonprofit newspaper serving the University of Louisville. 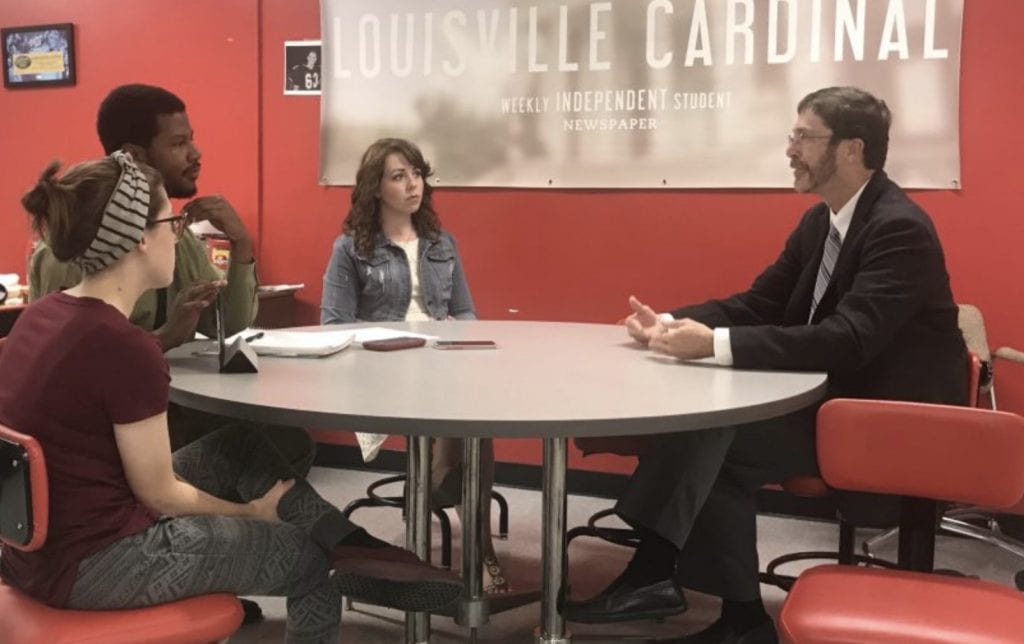 An official with the Southern Association of Colleges and Schools (right) talks with The Cardinal staff members in 2017, including former editors-in-chief Kyeland Jackson and Shelby Greenwell.

These are trying times for journalists. In newsrooms across this state and country, teams of editors, reporters and publishers strive daily to find new ways to serve readers while fighting for financial survival. The situation is no less true for student journalists than for the professionals they hope to become.

At The Louisville Cardinal, our student journalists, staff and board of directors understand better than most the pressures of trying to preserve the fourth estate. We are working hard to ensure that this is not the last year for the paper. Losing The Cardinal would leave the University of Louisville as the only school in the ACC without a student-run newspaper and with no place for budding journalists to prepare for careers in the profession.

The past academic and fiscal year was a year of transition for The Louisville Cardinal, which has served the University of Louisville community for nearly a century. But we still need help!

After the University of Louisville announced in late 2017 that it would drastically cut its support, our staff and board took on a series of initiatives to save the paper. Over the last year and a half, our efforts have included recruiting new board members, conducting fundraising activities for the first time and looking to streamline costs without jeopardizing the quality of our news operations.

We’ve reached out to potential supporters and sought guidance from advisors in U of L’s College of Business and from a team of executives in the Leadership Louisville Center’s Encore Louisville program. The response was good.

Over the last year, we raised nearly $30,000 – primarily by reaching out to new supporters. The board and staff are finding new ways to streamline costs, develop additional revenue opportunities and better market the paper. To its credit, U of L stepped up and provided $25,000 in advertising support we had not expected, and we added new advertisers outside the U of L community.

This allowed us to complete a successful news-gathering year with some remaining reserves. That said, the coming year will be tenuous. The budget our board recently passed for the 2019-20 fiscal year relies on an improved year of fundraising and moderate improvements in advertisement sales that we can’t be certain are coming. With those assumptions, the budget still requires us to nearly deplete our reserves.

In short, without increased support from donors, a boost in advertising sales and/or draconian cuts to our operating budget, The Louisville Cardinal won’t survive long-term.

For us, the situation feels dire, but we know that, with help, there is hope. As we’ve engaged with our alumni, U of L faculty and community leaders, they’ve responded to our calls for help. However, to survive, we also need the media industry to step up so more of alumni will be able to join your ranks.

The Louisville Cardinal is where I was first exposed to journalism, launching a 20-year career as a writer and editor in Kentucky. There are many great examples of former Cardinal staffers who went on to successful careers inside and outside journalism. We want to have more success stories and continue to provide a place where young journalists can hone their talents and make U of L a better place by providing thoughtful and thorough news coverage.

For those journalists and readers who can help, I urge you to support our cause by donating at http://louisvillecardinal.com. The Louisville Cardinal is worth saving!