Loyd Ford can go back to ‘just being Loyd’ 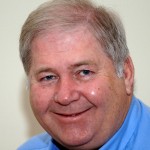 Unless you’ve been out of country for the last year, you know that The Lake News publisher Loyd Ford served 2016 as President of KPA.

He got to give up that title in January, turning over the reins to Ryan Craig. But it wasn’t until the end of January that he got to go back to “being just Loyd the newspaperman.”

That’s because he was also serving in 2016 as president of the Calvert Area Development Association, a term that came to an end on January 27.

Now Loyd’s ready to get back to just a life of writing stories and columns, taking tons of photos around Marshall County and putting them in the paper and online, selling ads to area businesses, getting the week’s issue to the printer and then heading hither and yon in that part of the state to deliver single copy issues to numerous business.

As he says, “just being Loyd.”