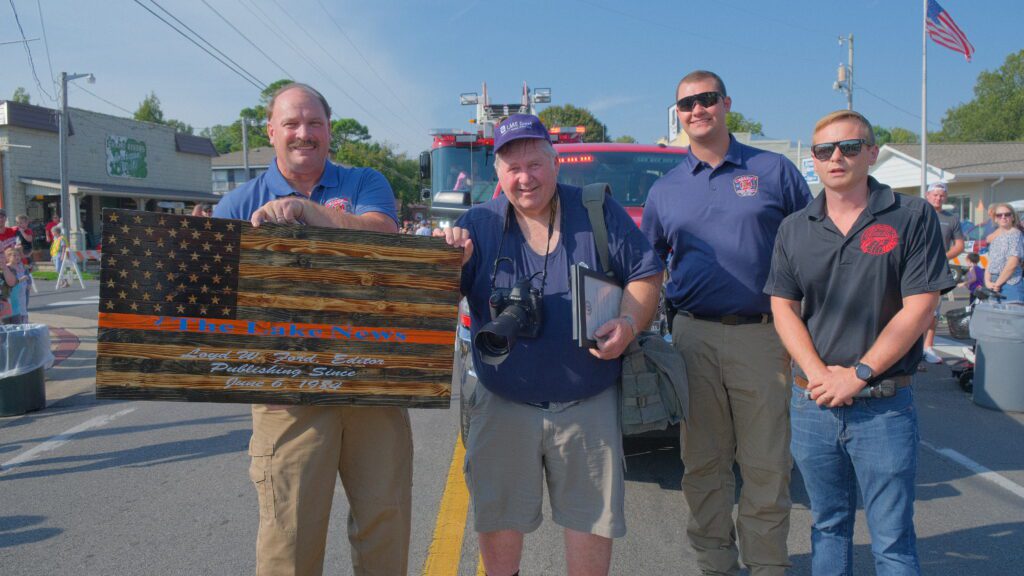 Few have been the times I have been totally flabbergasted and left without a word to say. Saturday I was covering the Hunter’s Moon Parade, it was north of 90 degrees, I have already walked close to two miles, taking pictures all over town, and I was a sweaty mess, busy taking photos of the parade which had suddenly stopped. I figured one of the politicians in the parade had gummed things up handing out campaign literature. Then I heard someone yelling my name. I had been looking for the grand marshals to take his photo so I thought that was why they were yelling my name. That wasn’t the reason. A couple of firemen one of them is a long time friend of mine, pulled me out in to the parade in front of a fire truck to give me a giant plaque, two different proclamations of appreciation and Judge Executive Garrett Gruber presented me with a commemorative Livingston County coin and proclamation for The Lake News’ 38 years of service to Grand Rivers and Livingston County. I don’t live in Livingston County and my paper is not located in Livingston County. But the people in Livingston County know I love Livingston County just like I love Marshall County. It was the first time in more than two decades that not a single member of my family was at Hunter’s Moon Festival with me. Teri was at a funeral service for the mother of a friend and both the kids were tied up with things. I was deeply honored and couldn’t do anything but babble. I still am shocked. — Thanks, Loyd.

One response to “Loyd Ford ‘speechless?’ Hell just froze over”