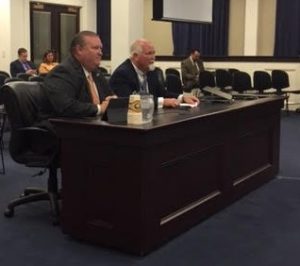 Gannett lobbyist Marc Wilson, who is with Top Shelf Lobby, and I testified before the Program Review and Investigations Committee on Thursday.

For the past 27 months, the staff of a legislative committee has had the task of studying public notices required by state mandates that public agencies have to publish in newspapers.

At the assignment of then Program Review and Investigations Committee co-chair, Sen. Chris McDaniel, the staff was to investigate the costs of public notices to local and state agencies and his assertion that a significant amount of taxpayer dollars would be saved by allowing those notices to be placed on government websites.

The 27-month study came to a close Thursday as the committee’s staff presented its findings in a 115-page report.

Several committee members made comments and asked questions but none were convinced moving notices out of newspapers is best for taxpayers.

Committee co-chair Rep. Terry Mills, who represents Marion, LaRue and Green counties, noted that he is an avid reader of the weekly newspapers serving his district. He currently subscribes to the publications’ Online versions but is moving that to a subscription of the printed newspapers. “Internet connection in my district is terrible so I’m better off subscribing to the printed newspaper.”

No legislation has been developed because of the study but could be introduced when the 2017 Kentucky General Assembly convenes in January.