Makes you wanna sing, ‘Shine On, Shine On Harvest Moon, Up in the Sky’

Kentuckian Rosemary Clooney was one of many to record this popular song and since it was written in 1918, I’m sure very few of you ever heard it. But reading about the lunar cycle in November, brings that song to mind. It’s not news you’ll find just anywhere. Google the song if you haven’t heard it. 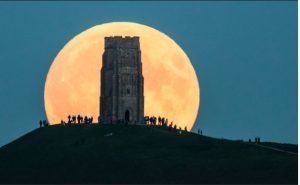 If you missed last weekend’s supermoon, which was a full moon also known as the Hunter’s Moon, don’t worry, there are two more in store for 2016.

And the November lunar cycle will orbit closer to the Earth than it has in decades, making the moon look enormous and luminous hanging in the night sky.

The Hunter’s Moon peaked on Sunday, a month after the Harvest Moon appeared in the afternoon sky with an orange, red hue.

November’s supermoon is referred to as the Beaver Moon. It was named during colony-era America as a reminder to set beaver traps for winter furs, according to the Farmer’s Almanac. It has also been called the Frost Moon.

The full moon will appear in the night’s sky on Nov. 14, and it will be the closest the Earth’s satellite has come to the blue planet since 1948.

So, let’s hope for clear skies.

The moon on that night can be up to 14 percent larger and 30 percent brighter than when the satellite is at its farther point in its lopsided orbit, or its apogee. The closest point is named the perigee. The moon will be at its apogee on Oct. 31, according to Earth Sky.

December’s full moon, or the Cold Moon, which is also a supermoon, will be paired with the Geminids meteor shower.