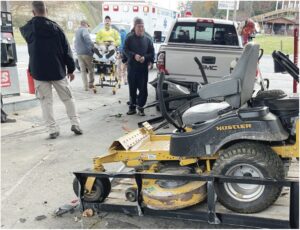 Tanner Hoskins, on gurney, is loaded into an ambulance after suffering serious injuries from a speeding truck.

Tanner Hoskins wasn’t at his regular job with the Kentucky Department of Transportation. Nor as the sports editor of the Manchester Enterprise because he didn’t have any athletic events to cover.

So he was focusing on his third job — his lawn service but had to stop at a local gas station to fill up the equipment. Problem was, a speeding truck came through the gas station while Hoskins was pumping gas. Estimates are the truck was going about 50 miles per hour.

Family members say the driver of the pickup truck has had medical issues (seizures) before while driving and may have been having a seizure this time as well. The truck continued through the parking lot and came to rest only when it struck a parked vehicle.

The force knocked Tanner 20 to 30 feet, landing face first on the pavement. He was taken to St. Joseph Hospital in London where the staff removed a large piece of glass from his head. He had deep lacerations to his head and legs but the full extent of injuries won’t be know until further evaluation.

“Without God, I wouldn’t be here right now,” Tanner said. “I’m lucky to be alive.”

Tanner’s father, Enterprise publisher Mark Hoskins who is also a member of the KPA Board of Directors, said Wednesday they still don’t know about any long-term effects Tanner will have from the incident.