• Talking Postal on “The Hill” 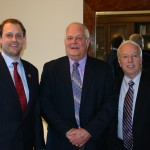 Chip Hutcheson and I spent Thursday traversing Capitol Hill. We met with Rep. Andy Barr, Travis Cone — a staff member of Rep. Hal Rogers, Sen. Mitch McConnell and Rep. Ed Whitfield to brief them on NNA/KPA concerns with the post office moving to five-day delivery and Negotiated Services Agreements as USPS has with Valassis.

I think Chip and I were both surprised and pleased that all four offices were well aware of all issues surrounding six-day delivery and it would appear none are in favor of that nor believe the post office can just do it without Congressional approval. 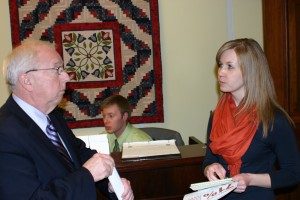 Rep. Whitfield even has a staff member whose responsibility is postal issues.

While the trip for me was basically up and back in 24 hours, it was worth the time to sit and talk with our Congressional delegation. Even though Barr married a Georgetown girl who was high school friend of my daughters, I’d not met him before. He is as concerned with postal delivery and how it would affect his constituents in rural areas as we are. 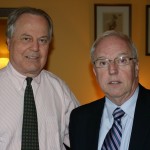 CHIP MOVING UP THE NNA LADDER

I didn’t know that Chip was on the NNA Executive Committee until yesterday. And then means within a couple of years, he’ll be president of the National Newspaper Association. I’m not certain the last time a Kentuckian was president of NNA and will be checking that history. I’m thinking George Joplin III, the late publisher of the Somerset Commonwealth Journal might have been back in the 1970s or early ’80s but not sure.

RADIOS IN CARS ON THE WAY OUT?

Some of you will remember the days when cars came without radios. Those were considered “options” and if you wanted a radio, you had to pay extra. Might we be headed back to those days?

This comes from B. Eric Rhoads who writes an INK TANK column about radio and audio. So will the car you buy in two to three years not have a radio in it?

“…But I also felt vindicated. The moment I am referring to was during our Radio Ink Convergence conference, held earlier this week. For two days, digital experts talked about the surprising growth of online radio listening in the past 12 months. We heard statistics and facts about significant increases. We heard that the iPad is the new transistor radio and the smartphone is the new radio receiver. We heard that Google’s YouTube is about to launch a radio service like Pandora, and that Apple is doing the same. So what I heard should have been no surprise, and in a way it wasn’t. But it was a shock.

For a decade or more, I have been banging my fist on the table, telling radio that a moment will come that the industry must prepare for. Some listened, but most ignored it as some “out there” prediction from an overzealous futurist. Yet what I’m about to tell you is not a prediction, and it’s not a guess. It’s a fact. And it was a giant shock for the people who attended Convergence.

On the stage were three representatives of the automotive industry: one from Gartner Research, a highly respected tech research firm; one from the Silicon Valley offices of General Motors, where they design interactive experiences and new technology for their cars; and one who represents an industry association for the connected car. They were on a panel moderated by Buzz Knight of Greater Media, and they talked about the direction of in-car experiences, the digital dashboard, and what will be coming next to the dash of the car — apps, Internet radio and audio in the car, and other things we knew were on the way. Then, suddenly, this statement was heard: “AM and FM are being eliminated from the dash of two car companies within two years and will be eliminated from the dash of all cars within five years.”

Gulp. Really? Did someone really just say that?

The panelists went on to say that young people don’t use radio anymore, and automakers see no need to continue to put radios in the car. The kids want Pandora, Spotify, and other audio services, and if they want radio, they can get it on TuneIn or iHeart or a similar service.”

Read the entire article at: http://ericrhoads.blogs.com/ink_tank/2013/03/a-cold-harsh-reality-for-radio.html

AND SPEAKING OF THE OLD DAYS

The idea of the postal service trying to cut costs and move to the five-day delivery made me think this week of how it was back in the 1950s. In Georgetown, at least, we didn’t see the mailman once a day, we saw him twice. Of course, Georgetown was much smaller then but the whole town had twice-a-day delivery. The first was between 9 and 10 a.m., the second between 2 and 3 p.m. My how time has changed things.

While one of its members, Kentucky’s own Rep. Hal Rogers, filed a “Continuing Resolution” to keep the US Postal Service from moving to a five-day delivery pattern, some House GOP members are thinking otherwise. Thankfully, it doesn’t appear any of Kentucky’s delegation think this way.

Here’s part of an article Max Heath has shared for www.thehill.com:

House Republican leaders believe the Postal Service has a green light to implement its reduction in Saturday service, even though a House-passed spending bill contains a provision requiring six-day delivery.   The interpretation by the House GOP could set up a showdown with Senate Democratic leaders, who have argued that the legislative language prohibits the cash-strapped agency from limiting letter delivery to five days a week.

The Postal Service (USPS), which lost nearly $16 billion in 2012, announced in February that it would end Saturday delivery of first-class mail starting in August, a move that it says would save $2 billion annually. Package delivery on Saturdays would continue.

Postal officials have for years pushed to limit Saturday delivery, but had previously insisted they would need congressional approval to do so.

But last month, Postmaster General Patrick Donahoe said the agency would move forward with its modified six-day plan and urged Congress not to try to tie the agency’s hands via legislative directive.

To read the rest of the article, go to:

REACHING OUT TO THE SECRETARY OF STATE

Most all editors know of problems around the state trying to cover elections, especially with access issues in polling places. I spoke to the County Clerks Association in December about trying to clarify the policy to allow media members in the polling places and this week reached out to Secretary of State Alison Lundergan Grimes for her help.

I know many newspapers and TV stations are given access to the polling places and they haven’t been told to “take pictures from the knees down.” But many are told that and some have even been prohibited from getting inside the precinct area. So it’s time to get an understanding for those who face those issues each time and make sure access is available equally.

I’ve written Secretary Grimes and given her the reports from newspapers for the last two elections. I hope that will show her the problems are real and that in most cases it’s simply a misunderstanding.

It would be easier to get that policy worked out with the Secretary of State than trying legislatively to put something in law. We’ve tried that already and the legislature doesn’t seem interested in helping out.

The Frankfort Plant Board keeps upping its speed of internet access, the access that KPA uses for its internet service. A couple of years ago, we thought 25 mbs was going to be a vast improvement. And now it’s upped the speed to 30 mbs.

It’s officially called the “veto session,” a 10-day respite when the legislature goes home and gives the governor time to consider vetoing any bills passed during the recent session.

Then they’ll come back for two days — March 25 and 26 — and consider overriding any vetoes. That’s the “veto override” portion of the schedule. And while there probably won’t be any vetoes to override — well maybe one or two — it appears they’ll be considering passage of a couple of other bills that didn’t make it through.

Whatever the case, March 26 becomes the last day of the session for now. If pension reform and tax reform legislation aren’t agreed to the final two days, watch for a “special session” on the horizon. Perhaps to start before they can even leave town again.

And remember, annual sessions were necessary so they wouldn’t have so many special sessions.

We didn’t lose any major battles during the session. While we might have wanted a little different language in some things, what was passed is acceptable.

So now the focus would be on a tax reform session, but only to make sure there’s no advertising tax considered if a services tax is implemented. And then we’ll head to 2014 and focus on getting our own newspaper carrier legislation through the process. We tried it with the Small Business Coalition this time but that only got through the Senate (SB89) and there’s no hope the Democrats will accept that legislation in any form. So we plan to go it alone in 2014.

Against my desire, we did end up extending the ad contest deadline another week. Newspapers have had the information since the end of January and six to seven weeks should have been more than sufficient time to register for the online entering and getting the contest entries together.

But early in the week, with just 29 newspapers entering, one division with no newspapers, one division with one newspaper, one with two and one with three, it was either scrap the idea, go with a very unfair contest or extend and try to get more entries. So March 21 is now the deadline, absolute, positive, no extension possible deadline.

This is a shortened version since I was out Thursday and returned today from DC.

If you need anything, call, write or email. Otherwise, thanx!!!