Mark Hoskins elected to KPA Board 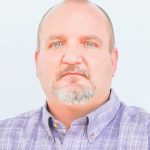 The self-proclaimed “Czar” of the Manchester Enterprise has been elected to the KPA/KPS Board of Directors as a result of a Special Election.

Jay Nolan, publisher of the Mountain Advocate in Barbourville, had been serving that district but was elected KPA Vice President at the January Convention, vacating the District 11 seat.

Mark will serve the unexpired term, through the January 2019 Convention at which time a full three-year term will take effect.