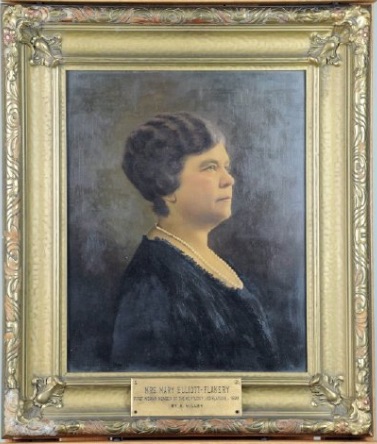 The “Behind the Scenes” tour for the KPA Board April 18 at the Kentucky Historical Society led to a portrait displayed but on a wall in an area not open to the public. It was a portrait of Mary Ellen Flanery. Louise Jones, the director of research management for the society, wanted to specifically show the board that portrait because it was of “the first female journalist in Kentucky.”

In the House of Representatives today, there is a plaque on her desk noting that achievement. She wrote a column for the Ashland Daily Independent from 1904 to 1926, part of that time being a legislator. And many of her writings were about serving in the legislature during that time.

Historical Marker #2136 in Catlettsburg (Boyd County) recognizes the historic achievement of Mary Elliott Flanery being the first woman elected to the Kentucky House of Representatives in 1921. Flanery was active in the Kentucky Equal Rights Association (KERA), where she worked with other Kentucky women suffragists including Madeline McDowell Breckinridge. Like Laura Clay, Flanery was particularly concerned with the inequality of marriage and divorce laws.

Flanery was born on April 27, 1867, in Carter County, Kentucky. She was educated in the local public school system and later attended Barboursville College, (present-day University of Charleston) in West Virginia, and the Agricultural and Mechanical State College, (now the University of Kentucky). In 1893, she married William Harvey Flanery. They raised five children while maintaining active public service. The newly married couple lived briefly in Ann Arbor, Michigan, before returning to Kentucky and settling in Pikeville. While living in Pikeville, Flanery became a journalist, and, from 1904 to 1926, she wrote for the “Ashland Daily Independent.” Flanery also taught school in Elliott and Carter counties, and, through her suffragist work, fought for education reform.

Shortly after the 19th Amendment gave women the right to vote, Flanery was elected to the Kentucky House of Representatives. This made her the first woman elected to a legislature in a southern state. As a legislator she successfully defended the act that created the teachers’ normal schools at Morehead and Murray colleges. Although she lost a bid for secretary of state in 1923, she remained active in politics. In 1924, she served as a delegate to the Democratic National Convention in New York City.

Mary Elliott Flanery died in 1933 at Elliott Hall in Catlettsburg. She is buried in the Ashland Cemetery. After her death, a bronze tablet was placed on Flanery’s desk in the Kentucky General Assembly that is inscribed: “Mary Elliott Flanery, first woman legislator of Kentucky and the South, Boyd County 1922-1923, at this desk served her state with honor and distinction.”

Mary Elliott Flanery (April 27, 1867 – July 19, 1933) was a progressive era social reformer, suffragist, politician, and journalist. She is best remembered as the first women elected to the Kentucky General Assembly. She was an advocate for equal rights for women, and actively worked to pass legislation that would give women the right to vote.