• Quick survey finds some use of video on KPNS newspapers

• Woody, Chloe are “all ears” waiting for newspapers to sign up for Fall series

KPNS newspapers and video use

David Greer has been taking a closer look at the websites of the 81 newspapers participating in the Kentucky Press News Service and has found the following results. Note that he just started the examination this week and will continue monitoring the websites to update the results.

“Did my first KPNS video survey today — all 81 websites.

“22.5 percent of KPNS members had video of some sort on their sites. In several cases, the videos were of national news events. Perhaps from AP or Bloomberg.

“Will continue this for a week or so.”

First ‘Just the Basics’ seminar a success; register for July 18 session in Lexington

Teresa reports the first KPA ‘Just the Basics: Making the Sale’ seminar she conducted at Western Kentucky University on Thursday was a success. And she reported having a ‘great time.’

We had about a dozen new or nearly new ads sales reps attending and that’s about what we expected. The seminar is geared toward ad sales reps that are new to the newspaper industry or having never gone through any training about newspaper sales.

The next seminar is scheduled for July 18 at the Lexington Herald-Leader. The cost is just $25 and includes lunch. Go to http://www.kypress.com and click on the banner at the top to register.

Sign up now for Fall Chapter Series ‘We’re All Ears!’

We hope you’re planning on participating in the 2014 Fall Chapter Series project, ‘We’re All Ears’ with Woody and Chloe and written by Leigh Anne Florence. The 10-week series begins the third week of September.

Now is the time to sign up by going to http://www.kypress.com/nie and completing the form for ‘We’re All Ears!’ 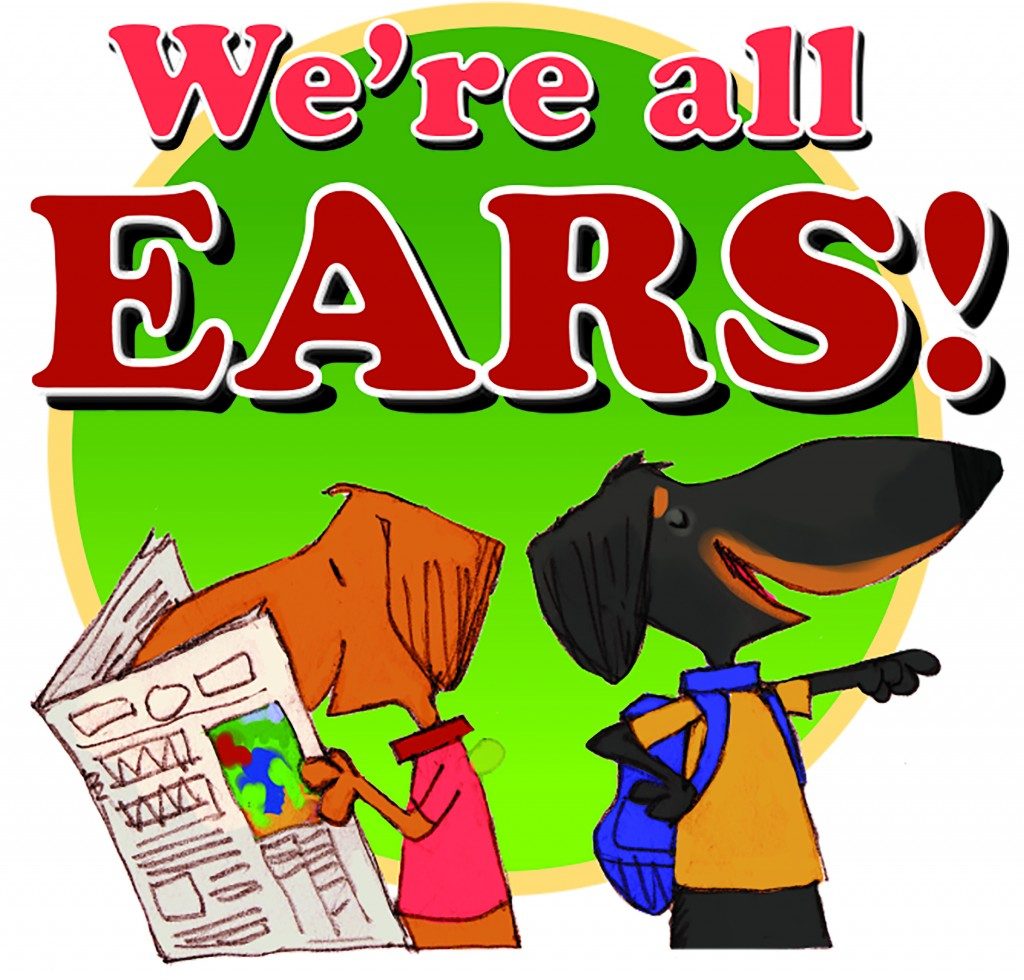 Fodor’s Travel has released its list of the 10 best small towns in America. “This year, we’ve focused on destinations with populations under 30,000 that have a vibrancy of their own and year-round appeal,” Michael Connelly and Abbey Chase write for the travel guide. “Our list is made up of detour-worthy towns all over the U.S. that have strong cultural offerings or great outdoor adventures in addition to standout dining and lodging options. For your next small-town getaway, head to any of these 10 remarkable spots

Question of the Week (and yes, it’s about political advertising)

Got the following question this week wanting to settle a disagreement within the advertising staff.

A:         I sound like a wishy-washy politician but the answer is Yes and No. Or “not necessarily.

State law requires all purchases over $25 to be made by check. But there is a qualified response to that.

A person could make any purchase for the campaign and pay for that with cash, credit card or check. If the person pays for the purchase — let’s say, political ad — with cash or credit card, the person must get a receipt and then submit that receipt to the campaign for reimbursement.

Since the campaign would write the individual a check, then the person and campaign have actually complied with the law.

So if someone comes in to buy ad space and it amounts to more than $25, you can accept cash or credit card payment without violating the law. Just make sure you give the person a receipt so he/she can submit it to the campaign for reimbursement.

No law requires political ads be paid in advance

While we’re on the subject, some newspapers try to claim that political ads must be paid for in advance of publication. That is not true. There is no language in state or federal laws requiring political ads be pre-paid.

However, we do suggest you make that a stated policy. But don’t tell them it’s the law because it’s not. It’s a good policy to have because if you run up a tab for the candidate and the candidate loses, chances increase you’ll never get paid for it.

As for political ads placed by KPS, we will have the money in-hand before we place an order for political ads to run. However, payment for those by KPS policy are made on the same basis as all other ads — 60 days from placement. There are too many instances of newspapers not running the ad, not running the correct ad, running the ad in the wrong color, or no color when color was ordered, and we might have to issue a credit and reimburse the campaign for non-runs, not correctly run ads. 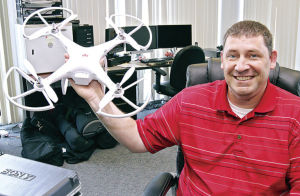 Randy Cash, Audio/Video Crew Leader with the City of Owensboro, shows off the City’s DJI Phantom remote-controlled helicopter in his office at City Hall on Monday. With the device, Cash can attach a GoPro camera and shoot aerial video of downtown construction, planning projects and outdoor events. “We’ve had it at the new convention center and hotel and it works great for construction,” Cash said.

By Keith Lawrence , The Messenger-InquirerI’ve published a few stories about the future of drones with journalism and now comes a story from the Owensboro Messenger-Inquirer about the city using a small remote-controlled helicopter to take aerial photos. In case you missed it, here’s Keith Lawrence’s story of a $500 helicopter with a $300 camera taking pictures from above.

On Saturday, when Owensboro officials dedicated the new $800,000 Travis Aubrey Skate Park, a small remote-controlled helicopter was hovering about 50 feet overhead and roaming above the crowd.  People were curious about what it was doing.  Shooting aerial video of the event, Mayor Ron Payne said.  Payne said the 6-month-old DJI Phantom gives the city the ability to shoot aerial videos of any outdoor event, downtown construction and areas where the city is planning projects.  ”It’s a real asset,” he said.  Payne said he saw an aerial video of downtown that was recorded by a privately owned mini-copter.  ”I thought it was shot from a helicopter,” he said. “And then it flew up inside the clock tower in Riverfront Crossing. I said we’ve got to have whatever that is.”  City Manager Bill Parrish said the small copter, which has a propeller on each of its four corners, cost $800.  The video camera it carries cost $300.  ”We took the money from the $30,000 franchise fee the cable company (Time-Warner) pays us for the use of our right-of-way for their cable,” he said.  Parrish said the city has used the Phantom to shoot footage that was used with the mayor’s State of the City address in January and for aerial views of street construction projects.  Randy Cash, the city’s audio/video crew leader, operates the Phantom.  It has a range of about 1,000 feet and can travel up to 22 mph, he said.  The approximately 2-pound craft is GPS-enabled so it will return to the place it took off from if it loses communication with its controller, Cash said.  It’s also Wi-Fi-enabled so the operator can watch on a smart phone the video that’s being shot.  ”It will go up 1,000 feet,” Cash said. “But I haven’t taken it up more than 150 feet.”  If the police department had a need for the copter for an emergency, he said, they could use it. “But primarily, it will be used for (the city’s) Channel 75 cable access,” Cash said.

The Media Credentialing Working Group has released its findings on a nationwide survey about access to media credentials. While it’s not really an issue with newspapers in Kentucky, because any KPA member can get a press pass issued by us, there were 12 responses from Kentucky to the survey.

The Rural Blog drills down into the report

Despite changes in mail processing and pricing over the past decade, the use of Standard Mail for renewal letters is still as valid as when the National Newspaper Association last wrote about this a few years ago. Recent questions from NNA members make this topic worth revisiting.

Such renewals travel in the same mailstream with First-Class letters and get generally equal delivery.

But first, a little history

Based on new rules concerning the amount of “personal information” that can be included in Standard Mail matter, the ruling concerns a mythical renewal notice for The Boston Post, used in prior such rulings during the past 20 years. The notice prominently displays the words “Renewal Notice” and encourages the subscriber to renew before his/her expiration date.

This Which or That?

The Run for the Roses had just ended, California Chrome was trotting to the winner’s circle, and my friend pointed at the track. “Hey, it’s the horse who won the Derby!” Sadly, all I could think was, “That’s grammatically incorrect!”

A horse is not a who. It doesn’t matter if you feed your Thoroughbred organic apples, send him to the equine spa, and bury him at the pet cemetery. A horse is not human, and you may use who only in reference to human beings.

If a horse is not a who, what is it? A that? A which? The answer is yes – both – and the one you choose depends on the sentence in which you’re using it.

For example, the exclamation in the first paragraph above requires a that instead of a which. “Hey, it’s the horse that won the Derby!” Why do we use that instead of which here? Because everything following that is central to the meaning of the sentence, and you always use a that to introduce a clause that is essential.

If we cut off the sentence before that, it reads, “Hey, it’s the horse!” The essential in- formation is not that it’s a horse, but that it’s the one that won the Derby.

Journalists have through today to sign up for the Mid-America Press Institute’s Sports Reporting & Writing seminar Monday, June 23, at the Indianapolis Star, 307 N. Pennsylvania St.

Registration for the one-day seminar is $25 and includes lunch. To register, email MPI Executive Director John Ryan at jmryan@eiu.edu.

Should you need to stay offer, the Hilton Garden Inn, 10 E. Market St., Indianapolis, is extending the Star’s corporate rate of $139 a night to MPI participants. Email Ryan to get a reservation.

10:05 – Getting the most out of social media: Tyler James, South Bend Tribune; Carrie Ritchie, IBM, adjunct faculty at Indiana University and formerly the Indianapolis Star

We all know that the Internet has killed the traditional newspaper trade, right? After all, until the general population started interacting with the web in the mid-90s, the newspaper business was thriving—offering readers top notch journalism and pages of ads.

But a recently-published study finds that we may be all wrong about the role of the Internet in the decline of newspapers.

According to research by University of Chicago Booth School of Business Professor Matthew Gentzkow, assumptions about journalism are based on three false premises.

In his new paper, “Trading Dollars for Dollars: The Price of Attention Online and Offline,” which was published in the May issue of the American Economic Review, Matthew Gentzkow notes that the first fallacy is that online advertising revenues are naturally lower than print revenues, so traditional media must adopt a less profitable business model that cannot support paying real reporters. The second is that the web has made the advertising market more competitive, which has driven down rates and, in turn, revenues. The third misconception is that the Internet is responsible for the demise of the newspaper industry.

“This perception that online ads are cheaper to buy is all about people quoting things in units that are not comparable to each other—doing apples-to-oranges comparisons,” Gentzkow says. Online ad rates are typically discussed in terms of “number of unique monthly visitors” the ad receives, while circulation numbers determine newspaper rates.

Several different studies already have shown that people spend an order of magnitude more time reading than the average monthly visitor online, which makes looking at these rates as analogous incorrect.

Gentzkow also points out that the popularity of newspapers had already significantly diminished between 1980 and 1995, well before the Internet age, and has dropped at roughly the same rate ever since. “People have not stopped reading newspapers because of the Internet,” Gentzkow notes.