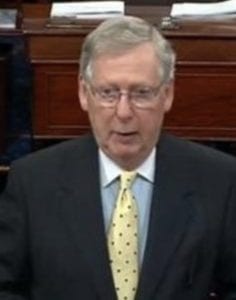 Add Kentucky Senator Mitch McConnell to the list of co-sponsors of S 1700, the “Journalism Competition and Preservation Act” (JCPA) with the appreciation of the News Media Alliance. The bill would provide a limited safe harbor for news publishers to collectively negotiate with Facebook and Google for better business arrangements.

With Sen. McConnell adding his name as a co-sponsor, Kentucky now has both U.S. Senators signed on. Sen. Rand Paul announced a couple of weeks ago that he would co-sponsor the legislation.

News Media Alliance President & CEO David Chavern said, “As local news publishers face increasing challenges arising from the dominant tech platforms, such as Facebook and Google, the support of Senator McConnell is more important than ever to ensuring the future of news. We are grateful for his commitment to quality journalism and we are confident that, with the continuing support and addition of co-sponsors such as McConnell, the Senate  majority leader, news publishers will soon have the ability to negotiate with the platforms.”

The News Media Alliance has been very vocal over the last year in advocating for such legislation, which it believes is needed to address the imbalance in the news publisher-platform relationship. “The tech platforms currently do not pay news publishers for use of their content, yet they take most of the advertising revenue sold against that content. Advertising revenue that previously went to the news publishers and allowed them to reinvest in quality journalism is now going to the platforms. Without compensation for use of their content, news publishers won’t be able to deliver the quality journalism people expect and rely on every day,” Chavern said.

Currently, the Duopoly captures 90 percent of all digital ad revenue growth and approximately 60 percent of total U.S. digital advertising revenue. The alliance believes the solution to this problem is to provide a safe harbor for news publishers to allow them to come together to negotiate with the platforms on their overall behalf.

The alliance applauds Senator McConnell  for his leadership in support of local news publishers across the country and looks forward to news publishers having the collective ability to ask the platforms for fair compensation for use of their content.