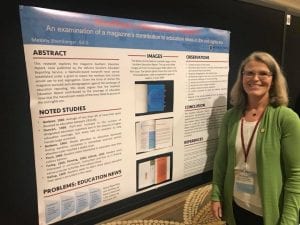 Melony Shemberger with poster presentation at the AEJMC History Division.

Dr. Melony Shemberger, associate professor of journalism and mass communications at Murray State University, presented two pieces of journalism history research in early August at the Association for the Education of Journalism and Mass Communication national conference in Washington, D.C.

Her paper, “Southern Education Report: An Examination of a Magazine’s Contribution to Education News in the Civil Rights Era,” was accepted as a poster presentation in the organization’s History Division. Her interest in the history of education news reporting also has been shared at previous academic events.

Shemberger also was part of a history research panel, titled “Votes for Women: The Role of the Press in the Struggle for Suffrage,” at the AEJMC conference. Her paper was titled “Writing Woman Suffrage: Tennessee Hometown Newspapers on the Vote for Women” and is part of a book that will be published in time for the centennial of the 19th Amendment, which granted women in the United States the right to vote. This paper also will be shared in a panel featuring the book’s contributors at the Ohio Valley History Conference in late October.

In continuing her focus on suffrage, Shemberger will present research in progress about suffrage press superintendents in Kentucky at the American Journalism Historians Association national conference in early October. Later that month, she will share additional research on this topic at the Ohio Valley History Conference.

She also was invited to present a paper at the inaugural Roy W. Howard Symposium at Indiana University in Bloomington in late October. Her research, “‘More Distinctive and More Revolutionary’: An Examination of the 1914 Model of War Correspondent,” focuses on how Howard — one-half of the Scripps-Howard media empire — developed a tactic that encouraged correspondents with the United Press wire service to circumvent censorship and restrictions during World War I and broke exclusive wartime news coverage.

Journalism and media history is among Shemberger’s top research interests. At Murray State, she teaches the graduate course, American Media History, and a section of the undergraduate Contemporary Mass Media, which surveys the history of mass media development.

Shemberger also is listed on the 2018-19 roster of the Kentucky Humanities Council’s Speakers Bureau, with two media history talks available. One is about Dorothy Dix, the early 20th-century journalist born in Montgomery County, Tennessee, and known for her advice columns and court reporting — the latter being the subject of Shemberger’s presentation. Her second talk explores the library bookmobile as an American icon.

For more information about her talks with the Speakers Bureau, visit https://www.kyhumanities.org/speakersroster.html.