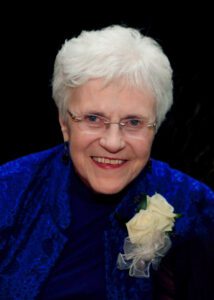 Blanche Trimble and I go back to 1969, when she chaperoned a Washington trip for Kentucky 4-Hers from almost every county. She was working for the University of Kentucky, where I work now. She worked with the Cooperative Extension Service. The Service defines its work as “practical education you can trust to help solve problems, develop skills, and build a better future.” Blanche Trimble was about all those things, as an Extension person and a newspaper editor and publisher, and that’s why I’m here today.

Blanche was a graduate of UK and spent 18½ years a photographer for the College of Agriculture and the Extension Service, also doing work for publications such as the Progressive Farmer. But she told an interviewer in 1980 that she had been interested in The Tompkinsville News ever since she could read it, and she wrote for it in high school. Clarence Martin tried to get her to buy it – or her father to buy it for her – soon after she graduated college. And when that opportunity presented itself in 1976, for an Extension person like her, it was just taking her public service to a new arena.

Back then, the major business of the Monroe County Press was printing, not The Tompkinsville News. But under Blanche and Joe, the paper became much more important, to the business and to the community.

The next year was the first election for district judges, and the News started printing the court news, without exception, though Blanche said she would get calls about every week asking her to omit one case or another, saying such things as “My son’s a good boy; don’t put his name in for that.” She said, “We print ’em just the way they come down here from the judge’s office. The judge tells ’em to talk to me, and I tell ’em, talk to him.”

That little piece of Blanche’s history tells a lot about her and the business she was in. Printing the court news holds everyone accountable, not just the defendants; it holds accountable the judges and the prosecutors, all of whom are elected, and provides information to voters. That’s just one example of accountability journalism, which is the main reason this country has a First Amendment to the Constitution that guarantees freedom of the press.

But the smaller the place where you live, the harder accountability journalism is for you to practice. The person you hold accountable today may be the person at the next table in the restaurant tomorrow; or someone who could do you a favor next week; or a person with whom you would like to be friends, or at least friendly. That is why community journalism is almost always more difficult than metropolitan journalism.

When I was teaching Community Journalism at UK, I told my students that if they remembered nothing else I said that semester, they needed to remember this: The key to real success in community journalism is managing the ever-present conflict between the personal and the professional – the desire to have friends versus the need to serve the public.

To do that successfully, people must believe that you are independent – that you are not carrying water for any public official, politician, faction, business or other special interest – and that you are publishing a newspaper as a public service, not just to make a living. From what I know about Blanche and Joe Trimble’s service to Monroe County, I think they did both of those things.

They did at least one very wise thing when they bought the paper. They registered to vote as independents, which Blanche said “blew everybody’s mind.” She told that interviewer in 1980 that she didn’t like not being able to vote in primary elections, but I think that’s one reason she DID register independent – so candidates wouldn’t ask her for her vote, or wonder how she and Joe might have voted. For her, being an independent was more than voter registration; that was just a symbol of how she approached the job of editing and publishing The Tompkinsville News.

I think that for Blanche, running the paper was primarily a public service to this community. Sure, a paper has to make money to stay in business, but I think you all know that Blanche put a lot of her energy into many other civic enterprises. It’s easier to have a good town and a good county if you have a good newspaper. As Blanche told that interviewer in 1980, “You’re supposed to tell the community what’s going on.” She did, and for that she deserves our thanks.

Now, that’s not to say printing the court news wasn’t also good business, too. Blanche said in 1980, “Everybody tells me the first thing they read is District Court.”

My comments via video

I was honored to be asked to be part of the memorial service for Blanche. Here are my comments:

Albeit remotely, it is an honor for me to be part of this celebration of the life of Blanche Trimble.

What a tremendous loss for the Monroe County community when Blanche passed away a few weeks ago.

In the last 17 months, Kentucky has lost eight giants in the state’s journalism industry.

Al Smith, a Past KPA President, passed away in March, 2021. Then Tim Kelly, former publisher of the Lexington Herald-Leader. Max Heath who was KPA President in 1987 and for some 30 years served as chairman of the National Newspaper Association’s Postal Committee. He knew more about postal issues for newspapers than any postal service employee.

David Hawpe, also a KPA Past President, who ws executive editor of the Louisville Courier Journal.

Billy Reed, one of the nation’s top sports writers.

In late 2021, we lost Betty Berryman, former publisher of the Winchester Sun, who was the first female to serve as President of the Kentucky Press Association.

Now we add the eighth journalism giant with the passing of Blanche. Perhaps she didn’t gain national notoriety like some of the others. But few were as well respected as Blanche Trimble.

In her humble way, she did not seek respect but she earned it from everyone who came to know her including her newspaper friends across the Commonwealth.

In conjunction with the National Newspaper Association, this industry was facing the task of getting the Postal Reform Act passed by Congress. KPA took the lead in that effort because the key Congressional member to getting this done was Representative James Comer. Throughout his time as State Representative and then as the U.S. Representative for the First Congressional District, there was but one person I would contact seeking his help. “I’ll talk with Jamie,” is how Blanche would respond each time. There was such a mutual respect between those two that I knew Blanche was key to getting his help.

When NNA asked KPA to get involved because of Congressman Comer’s importance to our effort, I told them that there was one person we had to have on the Zoom session. NNA wanted us to invite every newspaper publisher in the First District to participate in the discussion. I told them I would invite all of the 42 newspapers to be represented on the call, but there was only one who was key to getting Congressman Comer’s support.

That, of course, was Blanche Trimble. And how pleased Congressman Comer was to see his hometown newspaper publisher participating in the call. I didn’t matter if all the other 40 or so publishers each pleaded with “Jamie” to support the Postal Reform Act, we only needed Blanche’s presence to show him how important this issue was to community newspapers.

That effort paid off earlier this year when Congress enacted the Postal Reform Act and newspapers across the state have already seen the benefit of that effort.

Blanche, you will be missed!