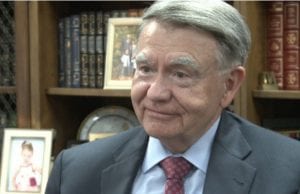 “I’m proud to congratulate my friend Mike Duncan on his confirmation to continue serving as a Governor of the U.S. Postal Service. Mike’s long career of distinguished public service in Kentucky and around the country has been marked by compassion, ingenuity and strong leadership. His colleagues on the Postal Board of Governors have recognized these traits and placed their trust in him as Chairman. I’m grateful Mike has chosen to keep lending his talents and experience to the world’s largest postal organization, and I look forward to his continued accomplishments on the Board.”

According to a record from the U.S. Senate, Duncan was confirmed but Kentucky Senator Rand Paul did not cast a vote. Here’s the vote for confirmation: VOTE TO CONFIRM MIKE DUNCAN

• Robert M. Duncan of Kentucky, for the remainder of a seven-year term and an additional term expiring December 8, 2025.

Mike is a member of the Institute for Rural Journalism and Community Issues advisory board and a financial supporter of that organization.