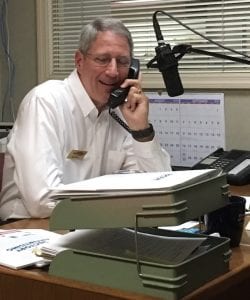 Mountain Advocate publisher Jay Nolan speaks with Ashley Byrne of Made in Manchester Ltd. during a phone interview Tuesday. Photo by Dave Henderson

Earlier this summer, Mountain Advocate publisher Jay Nolan sat down with a reporter from The Economist magazine. That interview touched on the resilience of locally-owned community newspapers, in contrast to the corporately-owned media outlets seeing their staffs and budgets slashed nationwide. Nolan is also CEO of Nolan Group Media, which along with The Mountain Advocate, is comprised of seven additional newspapers from Berea, Ky. to Jackson, Ky., and a printing plant in London. Jay is President Elect of KPA and will serve as President during KPA’s Sesquicentennial year.

Shortly after the Economist article was published, a media production company called Made in Manchester reached out to Nolan for a follow-up interview. The company, based in Manchester, England, produces radio programs for several media outlets, including BBC Radio and several other groups in Europe.

“While I am much more comfortable being the interviewer, it’s not everyday that a small business from our region gets an opportunity for international exposure,” said Nolan.

On Tuesday, Nolan sat down for a phone interview with Ashley Byrne, Creative Director and Founder of Made in Manchester Ltd, while an audio engineer contracted from Lexington, Ky. recorded additional sound clips of everyday life of the Mountain Advocate, including discussion of stories for an upcoming issue of the newspaper.

“It was exciting, and a bit strange being questioned in a thick British accent by someone sitting in London, England,” Nolan shared. “Hopefully, the story they tell will reflect positively on our business, this region, and the community newspaper industry.”

When the segment is produced and airs, a link will be made available at mountainadvocate.com.