My sister had to do some reading; I wanted to make her but then she already had done it 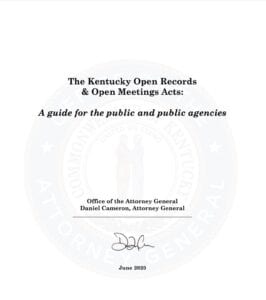 My sister, Anne, is on a public agency board in New Haven, KY. We were talking last week and she told me she had to think of me and Open Meetings and Open Records.

I was puzzled until she told me she was doing some reading from a booklet she received when the agency members were sworn into office. “It was a publication from the Attorney General’s Office.”

The lightbulb went off. She was talking about “Your Duty Under the Law,” the publication required by state law to be given to every member of a public agency when they take office.

It details all of the laws for Open Meetings and Open Records and it is furnished to heads of all public agencies by the Attorney General’s office. That’s Daniel Cameron’s version pictured at the right.

So my question was: “Have you read it?” Yes was her reply, as soon as she got home.

I gave her a little of the background, that it began with an idea from State Rep. Derrick Graham, back in the mid-1990s. Representative Graham and then-KPA general counsel Kim Greene worked diligently to get the legislation and then the book together.

Those public officials are required to sign a form they received the publication and that had to be filed with the agency’s clerk. We actually pushed for the law to read that the form would require officials to sign they had indeed read the book, not just received a copy of it. The League of Cities fought that, stating the officials may not have the time right then to read the book so we had to settle for them signing they had received the book. Probably to put on a book shelf someplace, never to see the light of day again.

So what does this have to do with you?

Contact your local public agencies, all the way up to presidents of state-supported colleges and universities, and tell them you want copies of the signed form that their public officials have received a copy this year. Then see if the member will tell you whether they’ve read the book or not.

Don’t be surprised if you get some “I have no idea what you’re talking about” responses.