Neil Belcher elected to serve District 7 on KPA/KPS Board of Directors. 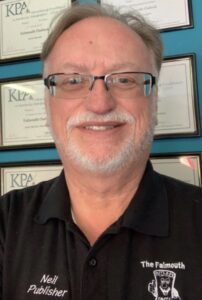 Neil Belcher, publisher of the Falmouth Outlook, has been elected District 7 representative on the KPA Board of Directors. The district seat came open this fall when Jeff Moore announced his retirement. Moore, general manager of the Carrollton News Democrat, Owenton News Herald and Trimble Banner, had been re-elected earlier this year to a new three-year term. Belcher will serve out the unexpired portion, through January 2024.

He is a 42-year veteran of the newspaper business.

Belcher, 63, originally from the northeastern corner of Ohio, has been the publisher of the Falmouth Outlook since 2014.

Belcher began his newspaper career as the Circulation Manager at his hometown daily newspaper, the Conneaut News-Herald. After 6 months, he transferred to the advertising department, serving as a Sales rep and then as Advertising Manager.

After 12 years at the News-Herald, he accepted the Advertising Manager position at Brown-Thompson Newspapers, a group of weekly newspapers near Erie, Pennsylvania, where he directed the sales efforts at 5 newspapers in five separate small communities for 5 years.

1n 1994, he accepted the Advertising Director position at The Good-News, a chain of weekly papers headquartered in Middlefield, Ohio where he served for 17 years. He was promoted twice; first to Business Manager, and then General Manager.

Belcher resides in Falmouth with his wife of 41 years, Marilyn. They are the proud parents of daughters Andrea Huey, 39, and her husband Nate of Kingsville, Ohio, son Bobby, 35, of Conneaut, Ohio, and Erica Corbett, 37, and her husband Tyler of Mesa, Arizona. They are also the proud grandparents of 7-year-old Olivia Huey and her 8-month-old brother, Liam.