The National Newspaper Association will hold its 2019 Convention in Milwaukee and as a kick-off event, NNA and the Wisconsin Newspaper Association are co-sponsors of a Leadership Summit. It will be a stand-alone event, allowing attendees to register only for the summit without committing to the entire convention. The cost is $99 and more information will be available in the near future.

We’ll be sending more information about the summit as well as the entire NNA Convention in the near future. For now, mark your calendar and make your plans to be in Milwaukee.

In the meantime, here’s a brief overview about the summit, designed for community newspaper publishers who could use some fresh ideas presented in an optimistic format. 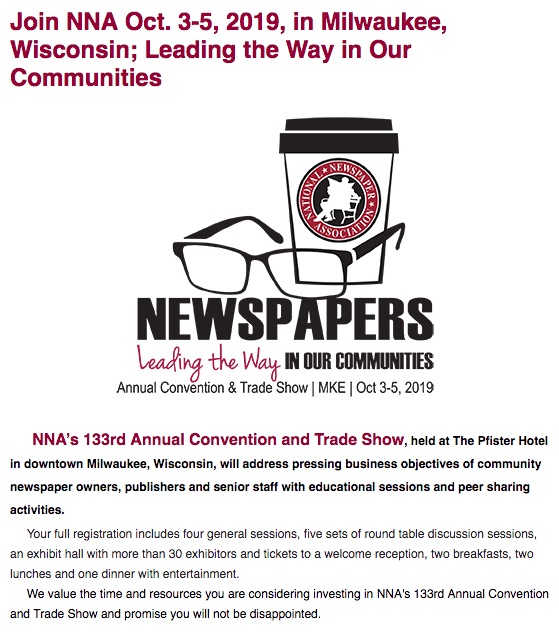 How to Make Your Newspaper an Invaluable Community Asset

Surveys prove that community newspapers are read, that their existence makes a difference, and that their role as watchdog is as important as ever. Newspapers are integral to communities, but an array of factors makes it difficult for newspapers to be profitable.

Marty Kaiser and other industry leaders will explore what it takes for a community newspaper to succeed — financially and as a public asset.

You will hear from and engage with journalists whose newspapers are successful because of the steps they have taken to respond to and adapt in our current, ever-changing environment. You will leave with tools that will help you make clear decisions in a cloudy time.

Marty Kaiser, one of today’s leading newsroom visionaries, is the former, long-time editor of the Milwaukee Journal Sentinel, leading his newsroom to three Pulitzer Prizes, in 2008, 2010, and 2011.

In August 2018 he was named the First Howard Distinguished Visiting Fellow at the University of Maryland Philip Merrill College of Journalism. He will help launch the Howard Center for Investigative Journalism Center, as well as work with the college’s award-winning Capital News Service to strengthen its mission of public affairs journalism, investigative reporting, cutting edge storytelling and entrepreneurial product development.