Newspapers in W KY gearing up for solar eclipse Aug. 21 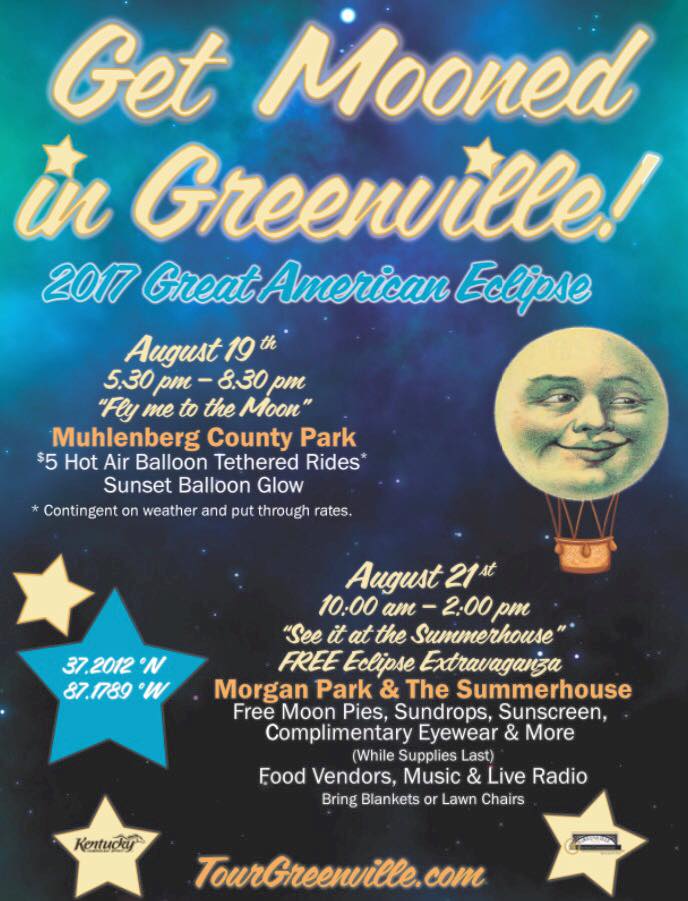 That’s a date that’s been on the schedules of newspapers and hundreds of thousands of people for who knows how long. That’s the day a solar eclipse fans across the country with the epicenter set to be in Hopkinsville KY. It’s the first total solar eclipse in some 99 years. And with such an event planned, with perhaps a half million people coming to the western part of the state to view the eclipse, we reached out to newspapers in the area to see what they had planned around the event.

As those reports arrive, we’ll share them with you. But here’s what four of them have planned.

Yes we have been covering the solar eclipse for two years. Every rental house boat on Kentucky Lake has been rented for two years. Special eclipse viewing areas will be set up at Kentucky Dam Village and equipped with first aid stations and restrooms. We are expecting upwards of 500,000 people to come to the lakes area for the eclipse. The longest totality is in Hopkinsville however the totality of the eclipse is only about 15 seconds less in Calvert City. And finally this kind of total eclipse hasn’t happened here in over 400 years. Locally thousands of eclipse glasses have been purchased one for every child in the county and thousands more to present to visitors to the area free. School will not be in session on the day of the eclipse in our county and in the surrounding counties. What have we done to monetize the eclipse? Well we have been running ads about the eclipse in our lake product now for two summers. We thought once about doing a special section but we are swamped right now. This week we printed a 22 page paper with a 16 page tab inside plus three inserts and we printed The Lake Light which is a 16 page tab. That means we printed the equivalent of a 38 page broadsheet newspaper. Teri and I worked until after 10 p.m. delivering and billing last night. We can’t find a delivery driver so we will both spend our day today driving a million miles delivering The Lake Light. So that’s what we are up to. I gotta hit the road. –thanks Loyd

Yes, we will. We will focus on news and features about how the eclipse will affect Mayfield-Graves County and they will be posted on our website for KPNS to use as they come out. The Paducah Sun will be doing a special section on that, probably focused regionally. The plan was for all Paxton Media newspapers in the area to contribute and we will do so if that project is implemented. We will keep ours centered on Mayfield. Right now there are no special events scheduled in the county, but that it likely to change. It may just be too early for those that might want to organize one. We’ll let you know if anything special pops up.

Yes, it’s quite an opportunity and we have been covering meetings for eclipse planning for about a year.

The Chamber of Commerce, park board and a local bank are teaming up for a festival at the park the weekend before the eclipse and then on the day of the event the Lions Club is renting space at its fairgrounds (adjacent to the park) for viewing and camping. All campers must be self-contained as there are no hookups there.

Our emergency management team has held two meetings with various local agencies, making sure the community is as ready as possible for an anticipated influx of people.

As Aug. 21 is a production day for us, we will have the opportunity to present our coverage the very next day. We have written about a Chamber of Commerce presentation in Greenville concerning Hoptown’s planned events and are planning to do much more reporting about traffic, safety and business concerns, as well as eclipse viewing do’s and don’ts in the previous week’s Leader-News.

As for special events in our area, the City of Greenville Tourism Commission has organized an event for Muhlenberg County, with the tagline “Get Mooned in Greenville,” which when I heard it, made me snicker and, in deeper thought later, realize that could result in some issues with the more demonstrative among our community and those coming into Muhlenberg County.

On Aug. 19, from 5:30 until 8:30 p.m., at Muhlenberg County Park in Greenville, there will be tethered hot air balloon rides and a balloon glow at sunset. On Aug. 21, from 10 a.m. until 2 p.m. at Morgan Park and The Summerhouse in Greenville will be the Great American Eclipse festivities, with free Moonpies, Sun Drop, sunscreen, protective eyewear and more, while supplies last.

I am told there are still hotel rooms available in Central City and as of yesterday, no three-day minimum for booking as there is in other communities.

I am attaching a flyer for the Greenville events — (above, Get Mooned in Greenville)