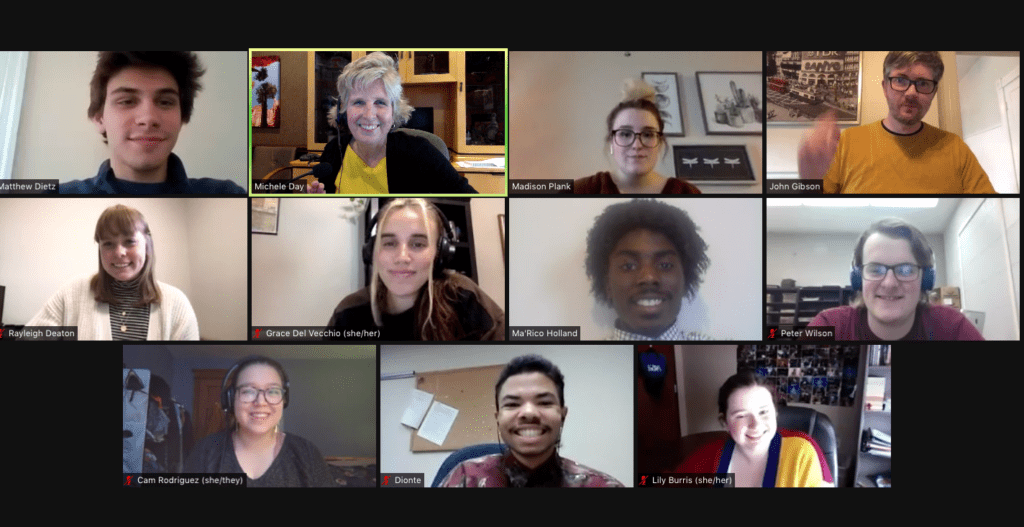 College newsroom leaders face challenges from re-engaging the student body in a post-pandemic world to obtaining public records to squeezing in time for personal lives, according to editors from seven universities who participated in a virtual Student Media Forum on Nov. 9. Despite the obstacles, the editors also expressed appreciation for the experiences that student media provide that they could not gain through classroom lectures.

“I think it is a little bit different to actually be covering something not as a student,” said Ma’Rico Holland, editor-in-chief at Kentucky State’s Thorobred News. “You have to think of it as the news aspect, covering it instead of just treating it like a normal event.”

“Being able to hear from the panelists and the experiences that they have had, particularly about contacting sources and being a voice for students on campus, was so valuable,” said Northerner Editor Matthew Dietz, who co-moderated the discussion with NKU SPJ President Madison Plank.

The panelists acknowledged that student journalists face potential conflicts of interest because they are covering their own campuses.

“When I started really jumping into student journalism on campus, I was so afraid to live my life and be engaged in things, in the event that I might have to cover them in the future,” said Cam Rodriguez, managing editor at DePaul University’s 14 East Magazine. “You can disclose all the conflicts of interest that you want, but you’re also a student and you’re living your life. You’re still a person before you’re a reporter.”

As journalists, the editors expressed concerns about access to information about their campuses.

Peter Wilson, news editor and upcoming managing editor at Eastern Kentucky University’s Eastern Progress, referred to this challenge as “cutting through brand management.” He described not receiving responses to emails and being made to go through many hoops just to end up with a canned interview with the university spokesperson.

“For the people who have had that happen to them, I just want to say, keep being persistent,” Holland added. “Eventually they’ll have to say something. If we don’t say it, somebody else will.”

Dionte Berry, news editor at Murray State University’s The State News, elaborated on this persistence as seeking out sources in person when they do not reply to emails.

Rayleigh Deaton, editor at the Kernel at University of Kentucky, encouraged creativity in contacting sources. “If you look at the number of resources we have today — we have social media, we have email, we have LinkedIn, we have Facebook … If email isn’t working out for you, DM them on Facebook. Reach out to them on Instagram. We have these resources for a reason. As journalists, if that is the way the media is going, then it’s our job to stick with the times.”

As the COVID-19 pandemic disrupted nearly all aspects of everyday life, student media have had to adapt to changing times.

The Northerner has prioritized online delivery over print. The Eastern Progress has gone from weekly to monthly. Thorobred News is now a strictly yearly review, focusing on the year’s most impactful stories.

WKU’s College Heights Herald has switched from weekly broadsheet to a monthly tabloid, which editor-in-chief Lily Burris said has opened up a lot for their digital site and daily newsletter. The Kentucky Kernel has begun a thrice-weekly newsletter alongside their lifestyle and fashion magazine KRNL, practically sending news items to subscribers every day of the work week.

The newsroom leaders also described the difficulties of building trust with their communities. “What we learned the most is that people don’t actually know the process of how news is made,” said Grace Del Vecchio, editor-in-chief at 14 East Magazine. “They don’t know if we’re doing our due diligence, making sure our sources are safe, particularly when there are sensitive topics that are being reported on.”

Transparency about the news process is the publication’s goal for this academic year, Del Vecchio added, exemplified by public newsrooms where more seasoned reporters and community members are invited to talk about covering sensitive topics.

It is important that everyone in the newsroom be on the same page about approaching topics and policies, Rodriguez explained, especially in a city like Chicago where Black and brown communities have been consistently misrepresented in the media.

“We really focus on not being voyeuristic and not parachuting, so really embedding ourselves in the community and building up those relationships, which honestly just takes time,” Rodriguez said.

The panelists encouraged staying objective regardless of what the readership demographic may be and using all-inclusive language. Rodriguez mentioned DePaul’s Spanish-language publication as an example of diversity directly impacting student media.

For students struggling to put words to paper, the panelists offered several writing tips. Sit down and frame the article like a conversation. Tell a story and consider what the most important parts are. Let ideas flow and let the story tell itself.

“A lot of times just thinking of a lead can be intimidating,” Berry said. “A lot of times, just put in a placeholder. Just put nothing and write your article, and then read it and think of what sentence you could come up with to wrap everything from there.”

The forum concluded with a round of advice for prospective students interested in joining news media. Be open to anything and allow people to grow. Take up every opportunity to learn new skills. Network and make friends. Do not be afraid to adapt to a constantly and rapidly changing world. Take up a different hobby from journalism to avoid burnout. Take pride in your work.

“Be bold and know your worth, and go do good journalism,” Deaton said.