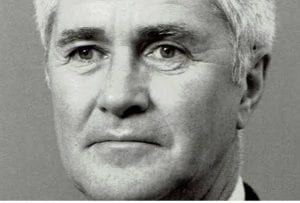 William Hanna, a longtime fixture of Lexington journalism, has died at 96.

Hanna’s health had been declining recently, and he died of pneumonia Wednesday at St. Joseph Hospice, according to his children.

“He taught us all how to play sports and how to be nice people,” said daughter Beth Hanna, owner of Hanna’s on Lime. “And he was our editor for life.”

Hanna graduated from the University of Kentucky with a journalism degree and was a staff sergeant in the Army.

He married his wife Jacqueline in 1948. They have five children: Jim, Beth, Mary, Tom and Bob.

Hanna, known mainly as Bill, never lost his interest in local journalism even after retiring from a series of managerial jobs at the Lexington Herald-Leader. Until shortly before he died, he called reporters at the Lexington Herald-Leader and Kentucky.com with article ideas and news tips. Reporter Jerry Tipton would make note of Hanna’s birthday each year in his column.

Hanna also wrote letters to the editor which conveyed his style as a traditional newspaperman.

He wrote a 2014 guest column about the plethora of catalogs in his mail after his late wife Jacqueline, a devoted catalog shopper, died. Hanna’s advice for getting off catalogs’ mailing lists was funny, tart and thoroughly Lexingtonian: “If you live on a funny-named street such as Chinoe Road, beware. Operators in New York and California have a hard time understanding our Kentucky accent. You can spell Chinoe for them and pronounce it coherently and they will murder the name.”

Hanna also wrote a 2013 column about November 22, 1963, the day President John F. Kennedy was killed in Dallas. Hanna recalled standing in the “wire room” at the old Herald-Leader building on Short Street, where news-service teletype machines were located, when a Marine captain from a nearby recruiting office came in and asked if he could read the wire service stories with staff members.

“When the words flashed on the teletype that Kennedy was dead, I glanced at the Marine officer, who had also read those words. He was standing at rigid attention with tears in his eyes and streaming down his face. His commander-in-chief had been killed.”

“It is my most vivid memory of that fateful day.”

Hanna could also exercise a rapier wit. In 2016, he wrote a letter to the editor excoriating broadcast announcers who refer to a basketball “timeout on the floor.”

“Where else do they think timeouts would be? At the concession stand? In the women’s restroom?” Hanna wrote.