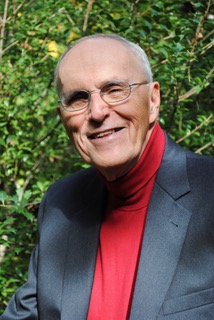 Contributions may be made to the William R. Neikirk Scholarship Fund at the University of Kentucky

Bill Neikirk, a nationally recognized journalist and author who got his start as a part-time sports reporter on the Herald-Leader, died August 27 after a long illness. He was 82 [born January 6, 1938].

A 1960 graduate of the University of Kentucky, Neikirk, who was born in Irvine, Kentucky, enjoyed a 48-year career as a newspaper reporter, most of it as a Washington correspondent for the Chicago Tribune. He joined the Tribune in 1974 and served first as an economics writer and later as the paper’s White House correspondent. He also worked briefly in Chicago, as the paper’s assistant managing editor for financial news.

Before that, Neikirk worked for the Associated Press, in Louisville, Lexington, and Frankfort, and in Baton Rouge, Louisiana, covering state government and civil rights issues. He was transferred to AP’s Washington bureau in 1969. Besides his newspaper articles, he also wrote three books—Volcker: Portrait of the Money Man, about the inflation-battling former Federal Reserve Board chairman Paul A. Volcker; The Work Revolution (written with Gail Garfield Schwartz), which described the rapidly changing global economy; and a fictional thriller, The Copperhead Club, set partly in the Kentucky mountains.

He won numerous awards for his journalistic efforts, and was a runner-up for the Pulitzer Prize in 1979 for a series of articles on the impact of world trade on American workers. He was inducted to the University of Kentucky School of Journalism and Media Hall of Fame in 1978. And he served as president of the Gridiron Club, a select group of Washington journalists.

Neikirk got his start on the Herald-Leader, where he worked part-time as a reporter to help work himself through college, covering high school sports. He had developed a passion for the games at Irvine High School, where he made the varsity teams in football, basketball, and baseball.

He and his wife, the former Ruth Ann Clary, met in Lexington during their college days while he was a part-time busboy in the Purcell’s department store cafeteria and she worked in the cosmetics department. They married in 1960 and moved wherever Bill’s career required. For the past 50 years, they have lived in Arlington, Virginia, a suburb of the nation’s capital. Besides his wife, Neikirk is survived by three children, John (Lisa), Greg (Jeannette) and Christa Neikirk (Kevin Chang), and two grandchildren, Matthew and Isabella (John), all of whom live near Washington.

Neikirk’s long stint on the Chicago Tribune gave him a window on major developments of the time—from the impeachment of President Clinton to several recessions and the transformation of the global economy. He also served in Chicago as an assistant managing editor for financial news.

Neikirk was White House correspondent for the Tribune during the Jimmy Carter and Bill Clinton administrations. He also was a syndicated columnist, and became a frequent guest on CNN and other TV outlets during that period.

He retired in 2008 after being diagnosed with non-Hodgkin’s lymphoma. During the seven years before his death, he suffered from debilitating dementia. 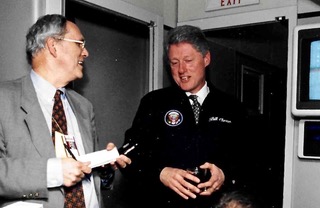 Bill Neikirk with President Clinton on Air Force One

Neikirk won the prestigious Merriman Smith Award in 1995 for his presidential reporting and the Loeb Award for business writing in 1979. He was regarded by his colleagues as a consummate journalist—a dogged, thorough reporter and a clear and careful writer who took pains to explain what he was covering and strove to put each story in a larger context. Doyle McManus, former chief of the Los Angeles Times Washington bureau, called him “one of the finest White House reporters of modern times.”

But he always considered Kentucky—and especially Irvine—his home. He returned there frequently to visit family members and friends, and he split the plot of The Copperhead Club, his novel, between Washington and the central Kentucky mountains. “My boyhood years never left me, and are an integral part of the landscapes and people” there, he wrote on his website (www.williamneikirk.com) when the volume was published.

Bill’s family has established a scholarship at the University of Kentucky to help deserving high school students, particularly those from Estill County, obtain a college education. The grant, intended for communication majors, is based on three factors—scholarship, financial need, and location. In lieu of flowers, contributions may be sent to the William R. Neikirk Scholarship Fund, University of Kentucky, at the Gift Receiving Office, 210 Malabu Drive, Suite 200, Lexington, KY 40502, or https://bit.ly/2xwienB. For further information and condolences, please visit https://adventfuneral.com.

Bill Neikirk was an economics pioneer for journalism  Article by Al Cross, Institute for Rural Journalism and Community Issues