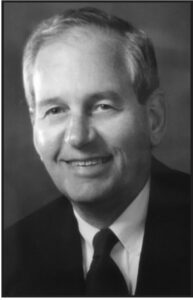 Bob was born in Ashland, son of the late Robert Atkins and Julia Edna Forgey McCullough.

He graduated from Ashland High School and Kenyon College in Gambier, Ohio where he was a member of Alpha Delta Phi Fraternity. After college he was commissioned a Lieutenant in the United States Air Force and served as an Instructor for Weapons Controllers at Tyndall Air Force Base in Panama City, Florida.

After Bob retired from the United States Air Force, he settled his family in Ashland. He began work at the Ashland Daily Independent, the local newspaper. His family and the family of J.T. Norris Sr. were majority stockholders in the Daily Independent. They sold the paper in May, 1979, to the Ottaway Corporation.

He retired in 1985 as President and Publisher. He was a member of The Rotary Club and served on the Board of the Kentucky Press Association. He also served as president for the Gertrude Ramey Home, a home for displaced children, founded by his father Robert Sr. and Gertrude Ramey.

Since 1995, Bob and Sue Carol have made their home in Venice, FL, enjoying time with their many long-time friends in the area.

At a later date there will be a graveside service for family in Ashland, KY. In lieu of flowers the family has requested memorial donations to First Presbyterian Church, 1600 Winchester Ave., Ashland, KY 41101 or Church of the Palms, 3224 Bee Ridge Rd., Sarasota, FL 34239.