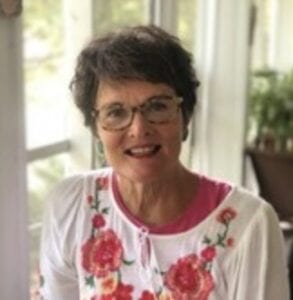 Duanne Bondurant Puckett, 70 passed away on February 21.  She was a native of Shelbyville, the third daughter of Jesse and Ella Puckett, who preceded her in death.

Duanne “married” a wheelchair in 1967, following an auto accident on February 25th when a drunk driver didn’t stop at the traffic light and rear-ended the Volkswagen in which she was a back-seat passenger. Her spinal cord was severed, but family and friends would say nothing could severe her zest for life.

After nine months in the hospital and physical rehabilitation center, Duanne returned home and completed her senior year at Shelbyville High School where she was a member of the Class of 1968, who started school in 1956 when Shelbyville began integrated classes. Duanne loved sharing the history of a friendship that stemmed from a teachable moment in that first-grade class: “Our teacher, Nellie Miller, always asked you to stand up front on your birthday so the class could sing. I shared a birthday with Larry McNeal. His nickname was Snookie. Mine was Doodie. He was chubby. I was skinny. She asked us to hold hands. I nearly fainted because he was a boy! Never occurred to me to be flabbergasted that I was white and he was black.  When we turned 40, Larry called me on our birthday – a tradition we continued until he passed away.  A new tradition continued after his passing because from that year forward his mother, Mary Ann McNeal, would call me!”

She was a storyteller of history in the community and in stories she wrote for local newspapers and magazines.  Duanne always credited her interest in joining the Shelby County Historical Society in 1971 to Rufus Harrod. Her other beloved historians were newspaperman Bennett Roach and researcher/author Brigadier General R.R. Van Stockum.  Duanne always stressed the importance of dates and names in articles and on photos, because of the influence from her other historian, Betty Matthews. It was Betty who challenged Duanne to label every family item in the house with its origin – history for future generations.  She loved to share the stories behind each treasured piece in her home.  Her family will continue to keep the stories alive.  She also learned much of the Puckett family and community history from her father, who served as a Shelbyville city councilman, mayor, city clerk and industrial foundation leader.

Duanne was a longtime member of the Shelbyville First Baptist Church before She started attending Centenary United Methodist Church in 1988.  During her membership, she helped with Vacation Bible School, Children’s Sermon Moment, Redwoods Women’s Ministry and Sanctuary Sunday School class as a teacher.  Duanne loved to share how God had not planned for her to be in a wheelchair, but He did plan to give her loving parents, devoted sisters, terrific friends and true grit to face whatever came her way.

A community fund drive was held in 1997 to purchase Duanne a van converted with a ramp to provide her independence once she acquired a motorized wheelchair.  She no longer needed family and friends to push, carry and lift her in order to participate in her many activities.  Family and friends know she replaced her wheelchair tires more often than individuals replace their vehicle tires.

Duanne often said she was a graduate of the “School of Hard Knocks”, because after her accident and graduating from Shelbyville High School, she did not go to college. Shelby News owner/publisher Bob Fay actually checked with her English teachers before offering her a job as a reporter in 1971.  That position led to a column “From the Desk of Bug” – a ladybug nickname to which she was referred until her death. She took on other roles after February 1972 when The News merged with The Sentinel to become The Sentinel-News. She was named classified advertising manager 1974, family living editor 1976, news editor 1982 and editor 1986.

Duanne’s writing was recognized with awards from the Kentucky Press Association and Society of Professional Journalists. She received the first President’s Community Service Award from Landmark Community Newspapers Inc. in 1989. In 1988, she was inducted into the Kentucky Journalism Hall of Fame after 27 years as a journalist, including 10 as editor.

She eventually went to work as community relations coordinator for Shelby County Public Schools. Duanne had always dreamed of being a teacher; however, colleges lacked accessibility in 1968. In her role with the school system, she was able to “teach” in classrooms with history lessons, writing resources and reading assistance.   Even after retirement you could often find Duanne rolling down the hallways of Painted Stone Elementary heading toward the classroom of one of her nephews or her niece.  There she would share her love of reading and the magic that can be found within the pages of a book.  Because of her accident, she was often called upon to stress the horrors of drunk driving before students headed for prom.  Many students approached her or wrote to her throughout her life thanking her for the inspiration she provided to them while students.

She retired in 2013 and went to work as chief writer for Shelby Life, a monthly magazine.  Through her gift of storytelling, she shared features on people of all ages and all walks of life.

Because of her hometown involvement, Duanne was named the Shelbyville Citizen of the Year in 2014 and the Distinguished Citizen of the Year by the Lincoln Heritage Boy Scout Council.  She had previously been recognized by the Shelbyville Business & Professional Women’s Club Young Careerist and Woman of Achievement, Ky. Farm Bureau Federation Communication award, Service Award from Shelby County Dairy Industry, Women “History Maker” award from the Kentucky Commission on Women, and the Shelby County Chamber of Commerce Small Business Advocate of the Year Award. She was also one of the founders of Leadership Shelby, a program to identify present and future community leaders. She served as program chairman and president, and was an Alumni of the Year award recipient.

In 2009, Duanne and others formed Friends of Grove Hill to clean and restore older monuments at the cemetery. Photos would show Duanne in her wheelchair, leaning over as far as she could in order to make an inscription visible. She was known to say, “If I can do it, you can do it” when volunteers were being recruited. She helped organize walking tours with “Stories Behind the Stones”, where she often could be found in costume portraying interesting characters from the past.  Although some may have found it depressing, you could often find Duanne and whoever she was treating to lunch having a picnic in her van parked near the cemetery chapel on pretty days.  She found comfort in the history in the monuments and knowing her loved ones were resting nearby.

Her other interests were being an avid reader and member of the Brown Bag Club at the Shelby County Public Library, which worked with Duanne and Victoria Schreiner to collect books for Reading Reindeer, a program that started in 1988 and continues to distribute free books to children in the community.  However, Duanne’s greatest love was her family.  She was a devoted daughter, sister, aunt, great-aunt and cousin.   Her family knows she was put on this earth to be a stable force in her family and a true example of a Christian.  Her nieces and nephews were blessed with their many adventures around Shelby County, numerous crafting activities at her dining room table, countless move-watching dates and her always cheering them on from the sidelines (camera in hand).

The funeral service will be scheduled for a later date.

Expressions of sympathy can be made in the form of donations to the Van/Ramp Ministry at Centenary United Methodist Church, PO Box 38, Shelbyville KY 40066.