Jim Ausenbaugh, 90, a teacher and former regional editor of The Courier-Journal, died November 27 in Scottsville. Services were held November 30.
(The following is written by a former student, Barry Rose, and published in the Bowling Green Daily News.) 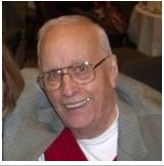 There is a legend that Jim Ausenbaugh once suggested a student rewrite a cover letter eight times before sending it to some prestigious newspaper in search of a job.

I don’t have that luxury to tell this corner of the world what a gem we lost with his death Monday.

He probably wouldn’t have liked this analogy, but Ausenbaugh was the rock of a dream team of sorts on Western Kentucky University’s faculty that began in the mid-1970s under the direction of David B. Whitaker, head of the Department of Journalism.

In photojournalism, Jack Corn and Mike Morse created a nationally recognized program. In print, Bob Adams – or “Mr. A,” as we called him – taught the basics and shepherded the College Heights Herald staff. Jim Highland taught public affairs reporting and told us we could do practically anything.

Ausenbaugh, a former regional editor of The Courier-Journal, brought us back to reality and taught us how much we had to learn. To us, he knew everything about writing and editing, knew every Kentucky editor who might hire a young student for the summer and could throw in stories from his days at what he called the “Curious Jumble.” He probably knew more Kentucky history and its towns than anyone in the History Department.

He’s the reason I and many others cringe upon hearing “partially destroyed” and point out that building a “new building” is redundant, since it seems kind of silly to build an old one. He also made us wonder: If something could be “overwhelming,” why then was “underwhelming” not in greater use?

I remember getting a C in advanced editing, and wasn’t ashamed. It was hard, and grade inflation was for other departments. To this day, around the country, there are Western grads who edit menus, cringe at improper possessives and check their church bulletins. There are also Western grads putting out really good newspapers, or using what we learned here in other walks of life.

A native of Dawson Springs, Ausenbaugh started his career at Western in 1976 after stints at the Evansville (Ind.) Press, Stars and Stripes and The Courier-Journal. In 1986, he was elected teacher of the year.