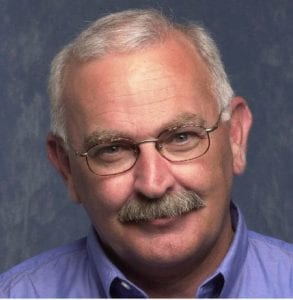 FRANKFORT  — Larry Dale Keeling, whose writings in the Lexington Herald-Leader for 41 years lambasted missteps of Kentucky politicians and lauded progressive government, died late Monday of lung cancer. He was 71.

Keeling, who grew up in Willisburg in Washington County, wrote for the Herald-Leader from Sept. 27, 1974 to Nov. 7, 2015, when he retired. During his years at the paper, Keeling was a reporter, editorial writer and columnist.

Known for his crusty comments in his columns and blogs, Keeling once wrote under the moniker “Kentucky Curmudgeon.”

He referred to former Gov. Ernie Fletcher, whose administration was mired in a merit system hiring scandal, as the “Boy Governor” and Fletcher’s staff as “Kiddie Korps.”

He came up with the term that encapsulated the scandal when he labeled it “Fletcher’s BlackBerry Jam.” The moniker came from the electronic trail of evidence left by the personal mobile devices of Fletcher aides.

Keeling said he thought of the phrase when he was mowing his yard.

In one of his final columns, Keeling wrote, “The Fletcher administration days were the funniest of times for curmudgeonly columnists (particularly compared to Steve Beshear’s, who can be rather dull to cover). Never a lack of inspiration for snarky columns. So, if Hal Heiner becomes governor and brings former members of Fletcher’s klutzy Kiddie Korps back to town, I may be tempted to extend semi-retirement beyond my previous plans.”

Keeling received a bachelor’s degree in 1969 from the University of Kentucky’s journalism honors program. He worked for two years on the UK student newspaper, The Kentucky Kernel, as a reporter and assistant managing editor. He liked to tell people he was a 1965 graduate of the old Willisburg High School. His late mother, Elizabeth G. Keeling, was Willisburg’s postmaster.

Keeling had “a wonderful, dry sense of humor.,” said Wellman, noting that Keeling often hosted parties near the opening of the Keeneland fall meet.

“Contrary to his curmudgeonly reputation, he was a good host.”

Read the rest of the story

Services will be held at a later date. In lieu of flowers, memorial contributions may be made to Bluegrass Care Navigators.