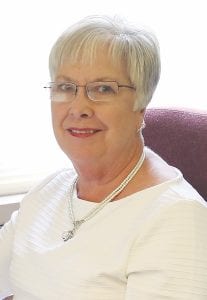 She was known for her community connections and her dedication to her family and her job as well as her loving and caring personality.

As the news of long-time Sentinel Echo employee Sue Minton’s passing on Wednesday night spread throughout the community, many people who knew and had worked with her were shocked and saddened.

Minton began working at The Sentinel Echo in 1976 when the newspapers were printed in the basement area of the current building. She had many stories about the days when the operation was run by Martin Dyche, then by Al Smith, who sold the company to corporate ownership. She said she had withstood the many sales of the company since that time, but remained loyal to her job and co-workers throughout the 41 years of her employment.

Minton was the longest employee in the history of the Sentinel Echo, coming in next to former business manager Judy McCowan who retired after 38 years of employment. Minton and McCowan became acquainted during their early years at the newspaper and remained friends over the years, even after McCowan retired.

McCowan said hearing of her long-time friend’s death was devastating.

“I’m so heartbroken,” McCowan said. “We’ve been friends for over 40 years. She seemed more like a sister.”

“Sue was not oly a dedicated employee, she was also a trusted friend,” managing editor Denis House said. “I’ve known Sue since I first started working at the Sentinel in 1983. She used to call me her “work Denis” since her husband was also named Dennis, although we spelled our names differently. She knew this community and was a wealth of information and knowledge. She loved watching her grandchildren play sports. I will miss her.”

Minton and McCowan had a bowl of Cheerios every morning around 9 a.m. in the employee breakroom while McCowan worked for the newspaper. But McCowan’s retirement ended that morning routine.

“She told me she hadn’t eaten Cheerios since I left,” McCowan said. “But we still had lunch sometimes and I always looked forward to seeing her. She was a true friend to me. She was a good person and she was always there when you needed her.”

Minton was known for her willingness to help others and her dedication to her job. She was responsible for publishing the obituaries, school news, business and church pages as well as several monthly and special publications such as the Chamber of Commerce newsletter and special sections for the World Chicken Festival, Laurel County Fair, and Laurel County Homecoming. She also participated in writing special stories for the Silver magazine (now Southeast Kentucky NOW magazine) and the annual veterans’ tribute magazine. She won a first place award in the only Kentucky Press Association contest she ever entered for her in-depth story on the Bush fire department.

Minton was well known in the community as well as with her newspaper job. Raised in Breathitt County, she met her husband, Dennis Minton, while attending Cumberland College in Williamsburg. The two married and settled on the Minton farm in eastern Laurel County in the Bush community, where they reared their daughter, Denise Griebel.

A devoted mother, she was just as devoted to her two grandchildren, Weston and Hailey. After working hours, she was on the sidelines of ballgames, cheering them on and always providing that special love set aside between grandmothers and grandchildren.

Tammy Mays worked at The Sentinel Echo for five years with Minton, although she said she was also related to Minton’s husband.

“Sue was just a good soul,” Mays said. “She wasn’t just a co-worker, she was family.”

That close tie continued between the two even after Mays secured another job. But the two still communicated frequently.

Minton was known among her co-workers for her smile and dedication to producing the newspaper with timely and community related news. She had called Laurel County home since settling here and ensured that local news and people were highlighted.

“I was very blessed to have worked with Sue for a little over a year,” Eldridge said. “She was one of the classiest ladies I believe I have ever met, a conscientious worker that strived to make The Sentinel the very best it could be with every edition. Sue had a quick wit and smile and I really think she knew everyone in Laurel County, or so it seemed. Her years here made Sue a treasure that we will never be able to replace, nor would we expect to. MasterCard would refer to her as “priceless”, and she was to us. She will be sorely missed and we pray for her family’s peace and comfort.”