Mardis won’t be forgotten in Pulaski

All of Pulaski has lost a friend

Bill Mardis – longtime editor, “Humble Reporter” and heart of the Commonwealth Journal – has passed away at the age of 89. 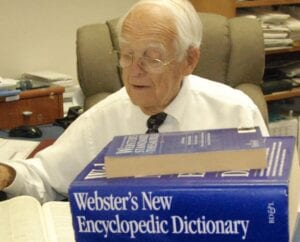 Along with publisher George “Jop” Joplin III, Mardis helped to merge two weekly newspapers into a daily, laying the foundation that would shape the publication into what it is today.

Mardis was a veteran of the Navy, having served during the Korean Conflict in the 1950s.

A native of Taylor County, the newsman began his career in radio as a broadcaster, working in Munfordville in Hart County and eventually ending up in Pulaski working for WTLO.

He and his wife, Linda, moved to Pulaski in 1960. Mardis was recruited by Joplin to come to the newspaper in 1964 as The Somerset Commonwealth and The Somerset Journal began their transition into a single daily newspaper.

Along with being the newspaper’s editor, Mardis was known regionally as the “Humble Reporter,” named after the column that shared homespun insights and was written in countrified spelling.

Most often starting with the phrase, “Friends, I ain’t never seed nothing lak hit…,” the Humble Reporter would comment on unusual happenings around Pulaski County, predict how many “rabbit trackers” would be seen during the winter, or lampoon current events such as his candidacy for “pressydint.”

Mardis said that the column began when he and former circulation manager Jerry Adkins ran upon a nest of copperheads.

Mardis stepped down as editor in 1998 and returned in 2002, later being named as editor emeritus. He continued to work three days a week up until January of this year.

Over the years, Mardis worked on many of the largest stories that hit Pulaski County, including the deadly tornado outbreak of 1974.

Eight Pulaskians died and many more were injured in what was called a Super Outbreak.

Coverage of the storm and its aftermath took up many of the pages of the Commonwealth Journal for months, and the impact from that storm stayed with Mardis so much that he wrote an annual reflection piece every year on its anniversary, April 3 and 4.

In September 2013, a mural was unveiled on the Maple Street side of the Commonwealth Journal offices depicting Joplin and Mardis.

Mardis said that he was honored to be included on the mural with Joplin. The then 82-year-old Mardis was quoted as saying, “I hate to use the word awesome because I’m too old.”

During that unveiling, Mardis also said he learned something new almost every day.

Mardis said, “Jop taught me so much … he taught me to interview… he taught me how to run a newspaper … but when you stop learning in this business, that’s when you’re done.”

Jane Joplin Evans, the daughter of Joplin, remembered how her father and Mardis worked together, Joplin as publisher and Mardis as news editor.

“Bill had an amazing ability to connect with others,” she said. “Community news was the biggest thing Bill understood. He and my dad were committed to that their entire lives. … He was always aware of what needed to be covered and made sure that it was.”

Evans said that during the time she was at the Commonwealth Journal, there were six or seven reporters covering the news, and Mardis would always make sure that someone was attending every meeting and event that needed to be covered.

She expressed her sympathy to Mardis’ wife Linda and the entire family.

Reflecting upon the life of his friend and fellow newsman, former Commonwealth Journal editor Ken Shmidheiser stated: “I had the pleasure of admiring Bill’s work ethic for the half-century I’ve known him. We often joked that when I started working at the Commonwealth Journal in 1970, Bill was my boss, and after he shifted to part-time in his later years, I was his boss. Fact is, Bill outlasted me. I retired at the end of 2018, but Bill worked right up to his death at age 89.

“Bill was not shy about his humble origins. He was raised in a poverty-stricken Taylor County family where his illiterate father was a groundskeeper at Campbellsville College. His childhood experiences — good and bad — provided the inspiration for his ‘Humble Reporter’ column which has graced the pages of the Commonwealth Journal for almost 60 years. Here’s a typical column opening:

‘Friends, I ain’t never seed nothin’ lak hit an’ your humble reporter tore the seat outta my britches as I tried to straddle a barbed wire fence.’

“When Bill wrote about mud oozing up between his toes as he herded pigs through town to the livestock auction, his words were real.

“Yet those who didn’t know Bill could be surprised that, despite the country bumpkin persona reflected in his column, he never wore ‘overhauls.’ Rather, he wore a business suit to work almost every day of his career. Bill told me that he wore suits as a matter of pride — a constant reminder of rising above his humble origins.

“Bill was much more than the ‘Humble Reporter.’ He was a chronicler of Pulaski County life and its people. During his prime he covered fender benders and interviewed Presidential candidates. And his legacy includes scores of state and national awards for outstanding journalism.

In his latter years when he switched to working part-time, his focus narrowed. In addition to ‘Humble Reporter,’ he penned memories about the history of Pulaski County, tracked the weather, and reported on his enduring fascination — local politics.

“Until his death, Bill had a keen mind and sharp wit. And he attributed his success as a journalist to the love of his life, his wife, Linda.

“Bill Mardis also loved his job, he loved Pulaski County and he loved its people. He outlived most of the peers of his generation, and as they passed he respectfully memorialized their lives in the pages of his beloved Commonwealth Journal.

“He worked until the end. He wanted it that way.”

Current Commonwealth Journal general manager Mark Walker said, “Since taking over as General Manager in Somerset in April 2020, Bill and I forged a friendship, and I enjoyed stopping by his office as I made my rounds in the building. I would always stand in the hallway and talk to him through the doorway, sometimes for an hour at a time. He was a very humble journalist who did not want any attention or spotlight. To him, the accuracy and impartiality of his work was paramount. He turned out huge amounts of incredible local content for the Commonwealth Journal and for our community. We are all heart broken and he will be sorely missed.”