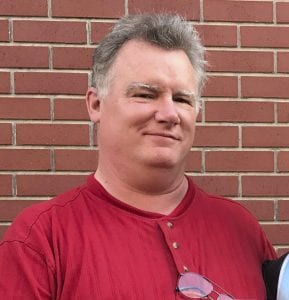 Edward Aaron Cahill, age 55, of Petersburg, IN, passed away on Friday, May 24, at the Deaconess Gateway Hospital in Newburgh, IN after a short illness.

Ed was born on Monday, July 22, 1963 to George Louis and Mary Alicia Cahill, at St. Mary and Elizabeth Hospital in Louisville.

Ed is survived by his daughter, Sarah Abigail Hope Cahill, and her brother, Eric Lawson, both of Lexington. He is also survived by his mother, Mary Alicia Cahill of Brooks, Kentucky and four siblings, Tom Cahill and his wife, Sara, also of Brooks, Kentucky; Steve and his wife, Cheryl of Fairdale, Kentucky, Darlene Bolin and her husband, Danny T. of Bardstown, and Brian and his wife, Sara of Louisville. Ed is also survived by his former wife, Michelle Russell Barger of Somerset, his nephews and nieces, Austin, Chandler, Luke, Matthew, Stephen, Alex, Jasmine, Brently, Susan, Ashley, Brianna, Wyatt and Braden, and a host of aunts, uncles, cousins and friends.

As a journalist, Ed had a passion for the newspaper business and sports. At the time of his death, he was the Sports Editor for The Press-Dispatch in Petersburg, Indiana. Previous he had been the Editorial Director/Editor and Publisher for The Portland Progressive in Portland, TN and The Westmoreland Observer in Westmoreland Observer in Westmoreland TN. He was the Managing Editor of The Macon County Chronicle in Lafayette TN and The Citizen-Statesman in Celina, TN. He was the managing editor of The London News Journal in London, Kentucky and a staff writer for The Corbin News Journal in Corbin, and The Somerset News Journal in Somerset. He was the managing editor of The Times Journal and The Russell County News, both in Russell Springs. He was the News Editor of The London News Leader. He was an editor for CACI, Inc., in Louisville, Ky. He was the News Editor for The Culpeper Star-Exponent in Culpeper, VA. He was the Sports Editor of The Star-News in Chula Vista, California, The Whitley Republican in Williamsburg, and Corbin! This Week in Corbin, and The Sullivan Daily Times In Sullivan, IN. He was also on the sports staff of The Courier-Journal in Louisville.

He was a 1981 graduate of Fairdale High School in Fairdale, and a 1985 graduate of Bellarmine College in Louisville, where he received his bachelor of arts degree in history and The Bellarmine College Concord Journalism Award. He was an avid Civil War Historian and Researcher. He was the owner of Cahill Communications, which published the Kentucky Civil War Journal. Ed was also honored to be a Kentucky Colonel,

Ed loved everything sports, especially high school football and basketball and major league baseball, especially the New York Mets! He was very proud of all of Sarah’s accomplishments and thrilled that she followed in his footsteps as a photographer, owning of her own business, Ky Cahill Photography.

Funeral services for Ed will be Thursday, May 30th at 2 p.m. central time. Visitation will be held from 5 p.m. to 8 p.m. central time on Wednesday, May 29th and Thursday from 8 a.m. until the time of the service, with Willie Sawyers and John Cook officiating.

Burial will be in the Lucinda Cemetery in Russell Springs.

Bernard Funeral Home in Russell Springs, has been entrusted with the arrangements.