Obvious OM violation and City of Ashland quickly admitted to it

It was easy to spot a violation of the State’s Open Meetings Law and fortunately the City of Ashland quickly acknowledged the violation. You can see on the announcement included here that the city put out a notice it would have a “special meeting today, Wed., June 20.” The Ashland Daily Independent did get notice of the meeting at 5:10 p.m. on Tuesday but the meeting was scheduled for 2 p.m. Wednesday. That’s about a 21-hour notice of a Special Meeting when the Open Meetings Law requires a minimum of a 24-hour notice.

The city of Ashland approved a $50 million municipal budget Wednesday during a special meeting, but the meeting was later invalidated due to inadequate public notice.

The Daily Independent notified the city of an apparent open meetings violation after the meeting was held.

City Attorney Richard “Sonny” Martin subsequently told the newspaper it was correct — the special meeting was not held in compliance with the state open meeting law, which require 24 hour notice to the public. 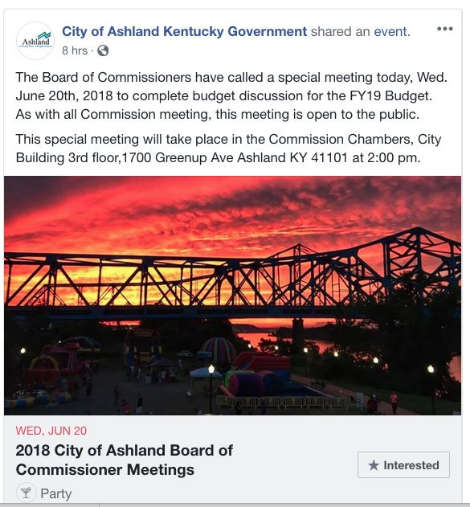 As a result the meeting is now being rescheduled.

“You are correct the notice failed to comply,” Martin said, adding he was responsible for the error.

Governments in Kentucky are required to give 24 hour public notice of special meetings. The meeting Wednesday was a special meeting but not deemed an emergency.

The Daily Independent did not receive notice of the meeting until 5:10 p.m. Tuesday night, which is less than 24 hours as required by the Open Meetings rules. It also appears details of the meeting were not posted on the city’s website until after the fact. The meeting was also not live-streamed as is usually the practice by the city. The city posted an item on social media a few hours before the meeting started, announcing it, saying it was having a special meeting, but it does not appear an agenda of the meeting was attached to the Facebook post.

“The Board of Commissioners have called a special meeting today, Wed. June 20th, 2018 to complete budget discussion for the FY19 Budget. As with all Commission meeting, this meeting is open to the public.

When a social media poster asked if the meeting was being live-streamed the city responded saying “We are recording the meeting now and will post the video. MyTownTVHD was not available to stream live today. Thanks for asking!”

Board of Commissioners council member Matt Perkins was out sick and was not in attendance. Council member Amanda Clark was out of town but participated by teleconference.

The city approved the following items under old business during the now nullified meeting:

— The tax levy for the year 2018. City Manager Mike Graese said the levy has not changed from the year prior.

“Basically the revenue stayed the same and the overall ad valorem dropped just slightly based on the PVA assessments,” Graese said.

— An ordinance requiring all food service workers within the city to receive Hepatitis A inoculations.

— Adopted a revised job description for corporate counsel as a full-time position. The city’s assistant counsel will now be part-time.

— Accepted a proposal by Howerton Engineering & Surveying for professional engineering and drafting services for a sewer lining project.

— Authorized a contract between the city and Great Southern Recreation for installation of new playground equipment at Central Park for $27,231.

— Authorized a contract between the city and Shield Roofing for the removal and replacement of the roof of the city of Ashland Central Garage Buildings in the amount of $43,608.84.

— Authorized an agreement for a school resource officer between the city and Ashland Independent School District.

The city approved the following new business under a first reading:

— An ordinance amendment to the city’s budget ordinance.

According to the Kentucky Attorney General’s Office, KRS 61.800 establishes the right of access to public meetings. A special meeting may be called but the agency must give written notice consisting of the date, time, and place of the meeting and the agenda. Written notice must be delivered to members of the agency and every media organization at least 24 hours before the meeting. Notice must also be posted in a conspicuous place in the building where the meeting will take place.