Take your pick. Want a jail mugshot that’s plain and simple? Some Kentucky jailers will oblige.

Want “Property of (name of jail)” printed diagonally in red on the photo. Some Kentucky jailers will oblige. 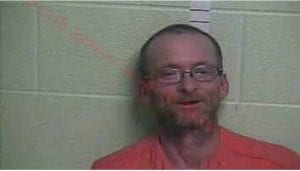 It’s been an issue for more than two years and just when we thought the issue was settled, they come back  stronger than ever before.

We reached out to the KPA lobbying firm, Top Shelf Lobby, because it helped us before. And now there’s a conference call scheduled for Monday to discuss returning to the days when photos submitted to the news media would not have what some call a “copyright” mark on them.

To get ready for the conference call and to show the red watermarks are an issue, we’ve been surveying newspapers this week. Initially 12 to 15 responded and two were getting clean photos. The rest were getting the marked up mugshots.

Yesterday, another request went out asking all newspapers to participate in the response. More than 35 newspapers responded yesterday. And the results are mixed. It’s not as clear cut as the first request was, with only two having clean photos, but the results still show there’s an issue.

There’s no reason jails should not be supplying a non-watermark version for news media use, be it for printed or online publications or for broadcast use.

And many cited the size of the mugshot as one way to resolve. Some newspapers pointed out that the smaller mugshots show the red lettering but when clicking on the option for a larger mugshot, the red lettering disappears. And it’s also not as simple as saying jails can supply clean photos while only mugshot supplier, such as JailTracker or Arrest.org, will make a marked up mugshot available. Some newspapers report they can get a clean copy from JailTracker or Arrest.org but can’t get a clean one from the local jail.

We’ll keep you informed of the progress in discussions and what you need to do if you want only a non-watermark mugshot for use.