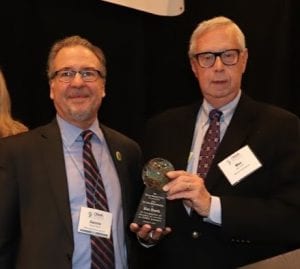 KPA Past President Max Heath displays the award he received from the Ohio News Media Association. At left is Dennis Hetzel, former general manager of the Kentucky Enquirer and now executive director of ONMA. Photo by Casey Cascaldo, The Lantern.

Max Heath received the Willie Maxwell Award, named for the editor of the first newspaper in Ohio (1793, when it was still Northwest Territory), for service to the industry.

Dennis Hetzel, executive director of the Ohio News Media Association, said, “Thank God for Max Heath” and said other state press associations, when asked, responded heavily “about the difference Max has made for so many newspapers” in emergency and other situations.

Max recalled helping Ohio papers such as The Budget, “a newspaper that has no other options than the Postal Service” and Farm and Dairy, with a similar audience reachable best by mail.

He also plugged the National Newspaper Association: “I know it’s tough these days, but NNA needs your support.” Max had long served as chair of  NNA’s Postal Committee.

Max was 1987 President of the Kentucky Press Association and had served as vice president for editorial with Landmark Community Newspapers, Inc., in Shelbyville.