One Kentucky record tradition keeps on during Jan. 20 Inauguration 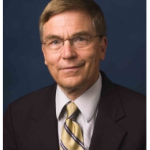 (Editor’s Note: Former Lexington Herald and Louisville Courier-Journal sportswriter Mike Ruehling, who served as press secretary for Sen. Wendell Ford for part of his time in office, was quite involved in planning a Presidential Inauguration. Senator Ford was on the Joint Congressional Committee on Inaugural Ceremonies charged with planning the inauguration. In fact, Senator Ford was on five Inauguration planning committees. Mike was staff director of the Joint Congressional Committee on Inaugural Ceremonies in 1989 for the Inauguration of George H. W. Bush and helped coordinate in 1993 for the Inauguration of William Jefferson Clinton. Knowing Mike had the experience of working with Senator Ford on two Inaugurations. I asked him to share his thoughts as he watched this year and shed light on how the Inauguration came about. Here’s Mike’s observations and one notice about a Kentucky tradition that continued this year.)

Mike has given his permission to any KPA member newspaper wanting to use his article.

Nearly everyone predicted that Wednesday’s Inauguration of President Joseph R. Biden Jr. and Vice President Kamala Harris would be the most unique in American history. In many respects, it was.

Necessarily downsized as a result of the COVID-19 pandemic and held on the U.S. Capitol’s West Front against a backdrop of never-before seen security, it had a very different look than inaugurations past.  Yet, somehow it managed to go off on time, as scripted, and with the same style, substance, and even normalcy that the country associates with this very special day that comes only once every four years.

Yes, the crowd was the smallest ever for a West Front Inaugural, but that number must be marked with an asterisk (*).  That’s because just over 1,000 tickets were issued by the Joint Congressional Committee on Inaugural Ceremonies (JCCIC)  because of the need to limit attendance due to the pandemic.  Typically 200,000 tickets are distributed for the event with the bulk going to Members of the House and Senate and President-elect.  Members this year received just two tickets—one for themselves and a second for a guest.  The crowd estimate does not include the more than 25,000 armed National Guard troops along with federal, state and local law enforcement agencies present for security purposes.

Despite the extraordinary circumstances, several Inaugural traditions prevailed.  As customary, the ceremony was held outdoors on the Capitol’s West Front despite security concerns.  The legendary Marine Band, which has performed at every inauguration since Thomas Jefferson’s on March 4, 1801 was there in full force with a 13-song prelude between 10-11:30 a.m.  As in the past the Chief Justice of the Supreme Court, this time John Roberts, administered  the Presidential oath.  He finished at 11:48 a.m., a full 12 minutes ahead of when President-elect Biden- under the Constitution–officially assumed office at noon.

A number of other traditions did not happen for  various reasons.  They included:

No Outgoing President In Attendance:  President Donald Trump was the first since 1869—and only the fourth in history—not to attend his predecessor’s inaugural ceremony.  Andrew Johnson, the 17th President and first to be impeached, skipped the 1869 event.  He reportedly stayed at the White House signing last-minute legislation until his term expired at noon.  John Adams, the nation’s second President, and John Quincy Adams, the sixth, also were not present for the inaugurations of their predecessors.

No Congressional Escort to the Capitol: Another longstanding tradition is for members of the inaugural committee to go to the White House mid-morning by motorcade and formally escort the President-elect, Vice President-elect and their spouses, along with the outgoing President and spouse, back to the Capitol .  Following a brief White House reception, the procession departs 1600 Pennsylvania Avenue and up Constitution Avenue to the Capitol grounds.  Mid-morning this year found President Trump already on a plane bound for Florida, making this another tradition that did not occur.

No Inaugural Luncheon: After the East Front farewell event, the new President and spouse are escorted to Statuary Hall in the U.S. Capitol for the “Inaugural Luncheon.”  Invited guests typically include the the President and Vice President and their families along with Congressional leadership, members of the JCCIC and their spouses.  This tradition dates to 1897 when the Senate Committee on Arrangements hosted a luncheon for President William McKinley and several other guests at the U.S. Capitol.  The luncheon’s current format began in 1953 with President Dwight Eisenhower, Mrs. Eisenhower and 50 guests of the JCCIC dining in the now-restored Old Senate Chamber.  This year’s event was cancelled due to COVID-19 considerations.

No Congressional Pre-Ceremony Hospitality: Inauguration Day usually finds many House and Senate members hosting morning receptions in their Hill offices for guests from their respective districts and states.  Those events did not happen this year again because of pandemic-related concerns that limited Inauguration attendance.

One Kentucky tradition has endured: Last but not least there was one other Kentucky-related tradition that endured.  Starting with the late U.S. Sen. Wendell Ford in 1981, a Kentuckian has been on the prestigious six-member JCCIC for eight of the past 11 inaugurations.  Ford was on the committee in 1981, 1985, 1989, 1993 and 1997.  Senate Republican Leader Mitch McConnell was a member of the committee for this year’s ceremony as well as in 2017 and 2001.  Since 1901, the Joint Committee has been responsible for planning and conducting the inaugural ceremonies of the President-elect and Vice President-elect at the U.S. Capitol.  No other state in recent history has been represented on the committee as many times as Kentucky.