From the Bluegrass Chapter of SPJ

The recently completed session of the General Assembly threw several scares into journalists and other advocates of open government. The legislature made itself and just about every other part of government in Kentucky less transparent, and it could have been a lot worse. We won some battles, but more are ahead – both in the legislature and with public officials and employees who treat public records as if they were their private possessions. 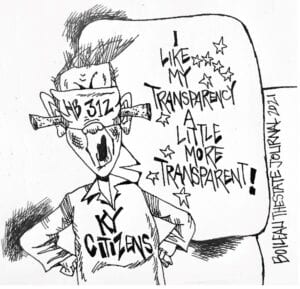 To help journalists deal with those issues in their work, and help boost efforts to defend open government, the Bluegrass Chapter of the Society of Professional Journalists will present “Open Government: Where is Kentucky headed?,” a Zoom panel discussion with questions and answers, at 7:30 p.m. ET Thursday, June 17. The panelists will be:

Tom Eblen, president of the chapter and retired columnist and managing editor of the Lexington Herald-Leader, will be the moderator.

Some questions likely to be addressed by the panel are: