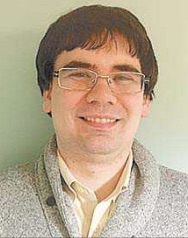 John Overby has been named general manager/editor of the Central Kentucky News-Journal in Campbellsville.
As GM/Editor, Overby will be responsible for the operational oversight, coaching and leadership of the newspaper’s staff in the development and successful implementation of strategies to improve the news product, grow net paid circulation, and accelerate the profit growth of the newspaper.
He will also be responsible for leading all aspects of news gathering, reporting, feature writing, photography and other information content oriented activities of the newspaper and its online product.
Overby, 28, brings to this leadership position at the weekly experience and qualifications in the community newspaper industry both within and outside of Landmark. His professional career began in 2010 as general assignment and sports reporter with the Adair County Community Voice in Columbia. In 2013, Overby joined The Springfield Sun as sports reporter. In 2014, Overby joined the Central Kentucky News-Journal as a general assignment reporter and writer. In 2015, Overby’s career path with LCNI took him back to Springfield when he was promoted to editor of The Springfield Sun.
In late 2016, Overby moved back to the Columbia, Kentucky, community where he has worked with the Adair Progress as the newspaper’s assistant editor and composi- tion manager.
“I’m very excited to be back at the CKNJ and in the Landmark family,” he said. “I can’t wait to get started and build on what’s already a great product for the Campbellsville community.”
A native of Creelsboro, in Russell County, Overby earned a Bachelor of Arts degree in Media Studies from Lindsey Wilson College and a Master of Arts degree in Sport Management from Campbellsville University.